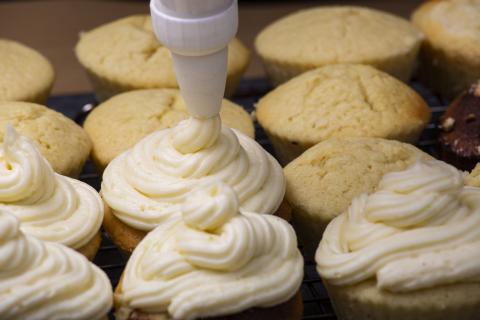 3D printers in the kitchen

Since it first became popular in the 2000s, 3D printing has been widely used in the automotive industry, for medical prostheses and in the manufacture of plastic figurines. So, why should it not be used to help create the food of the future? This is what the Product Engineering (GéPro) team at the SayFood laboratory (Univ. Paris-Saclay, INRAE, AgroParisTech) are putting forward.

Apprentice pastry chefs have reason to be joyful. Soon, they will no longer be needing piping bags to create their sweet treats as printers will be able to do it for them! Camille Michon and Giana Almeida, who both work at the SayFood laboratory (Univ.Paris-Saclay, INRAE, AgroParisTech), are testing which foods would be compatible with such an approach. Their research, which has been carried out as part of the ID3AL project, is looking into the potential of 3D printing in the creation of innovative dishes. The printing principle which has been developed is based on classic 3D printing. A sufficiently malleable preparation is pushed through a narrow opening and the long strip which emerges is stacked in successive layers to form a three-dimensional object. Using a digital model, it is possible to create dishes with original shapes and to reproduce them easily.

Trying to find the perfect texture

Everything depends on the consistency of the dough. While other researchers are interested in mashed potato and surimi paste, Laurena Masbernat, Giana Almeida and their colleagues have chosen to explore the potential of a basic dough which has been made using just four ingredients - wheat flour, water, sugar and oil. By altering the amount of each ingredient, the research team has created dough of very different textures.

However, as these mixtures are quite liquid at first, they must be kneaded and cooked for fifteen minutes at over 85°C before being introduced into the printer. During this cooking process, the viscosity of the dough increases to a level close to that required for the 3D printing of thermoplastics. This is for a good reason. The dough passing through the printer must be firm enough so that the lower layers do not collapse under the weight of those above.

Harnessing the potential of wheat flour

The proportions of water and flour must be adjusted to control the viscosity of the dough. A distinctive feature of the mixtures used by the team at SayFood is that water takes up almost half of the volume. When wheat flour is hydrated in this way, the starch granules it contains absorb water during the baking and this changes their structure. They swell and become intertwined in a matrix of proteins, which increases the viscosity of the dough during baking. The result is a dough texture which is very suitable for 3D printing.

However, sugar and oil also make their own impact. For example, the addition of sugar slows down the swelling of the starch granules during cooking. The various quantities must, therefore, be accurately measured. The researchers have succeeded in printing a variety of objects which replicate those generated on the computer using dough containing 65% water to 15.5% flour, 12% sugar and 7.5% sunflower oil.

Even though 3D printers in the kitchen are in their infancy, this work shows they have many possibilities. However, there are no immediate plans to replace cooks, pots and pans with a whole battery of printers, although several new ideas are emerging. These include customising food for a special occasion, recreating burgers and pizzas or inventing new shapes for dishes with unique appearances and textures. There is something to suit all tastes!