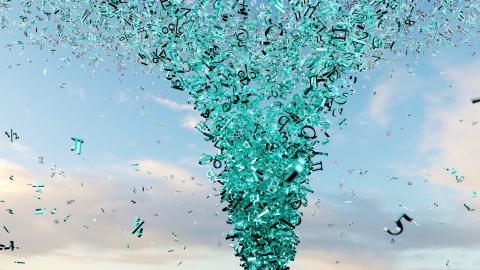 Bertrand Maury is a research professor at the Laboratory of Mathematics, Orsay (LMO – Univ. Paris-Saclay, CNRS) and has been an associate professor of mathematics at ENS – PSL for eight years. A specialist in the mathematical and numerical modelling of complex phenomena, Bertrand Maury’s work results in very practical applications ranging from particle flows to the movement of crowds. He has been awarded a 2022 silver medal by the CNRS.

Before graduating from the Ecole Polytechnique in 1988 and embarking on a PhD, Bertrand Maury had never considered becoming a researcher. He was attracted by abstract mathematics, although the subject of his CIFRE thesis carried out at Saint-Gobain was on the shaping of flat glass and was more related to fluid mechanics. After defending his thesis in 1995, Bertrand Maury decided to move away from a traditional career path into industry and to instead focus on academic research, as he was keen to explore his subject in greater depth. The researcher left France for a two-year post doctorate at the University of Houston in Texas where he developed tools for the numerical simulation of fluid and grain flows.

On his return to France, he was recruited as an associate professor at the Jacques-Louis Lions Laboratory (LJLL) at Université Pierre et Marie Curie – one of the most prestigious places in the country for applied mathematics. Teaching fluid mechanics to his students strangely made him want to return to more theoretical mathematics. “I wouldn’t have been involved in research to such an extent if I hadn’t taught,” confirms Bertrand Maury. He obtained his ‘habilitation à diriger des recherches’ (authorisation to direct the research of others – a post-doctoral degree) in 2002 and the Laboratory of Mathematics, Orsay (LMO) recruited him one year later as a professor.

To begin with, the mathematician was involved in so-called ‘service’ mathematics for other sciences. This involved calculating approximate solutions to equations and creating computer tools capable of solving the equations. He then gradually moved towards modelling itself and made it the central focus of his activity. “Modelling involves the mathematisation of reality. I set up equations before analysing them and designing numerical methods to solve them,” explains the research professor. “From there, I try to reach a better understanding of the phenomena by returning to reality and questioning the initial equations. The work produced by abstract mathematicians responds to reality, but does not lead to quite the same thing. It’s this gap which opens up new issues.”

The lung, a beautiful mathematical object

The possible applications are as diverse as they are unexpected. Bertrand Maury modelled the human lung using simulations of the equations of the flow of fluids in the upper part of the bronchial tree. “Following a suggestion made by a fellow theorist, we extrapolated the real lung to create an idealised object with an infinite number of generations. The purity of this new object makes it suitable for the application of abstract mathematics, which the real lung, with its finiteness and variability, allows for less.” This work is now referred to as the ‘Maury Matrix’ and was awarded the Blaise Pascal Prize by the French Science Academy in 2008.

Bertrand Maury had the idea of an analogy when he was working on the problem of rigid grains immersed in a fluid. “Initially launched as a joke, our mathematical model (published in 2010 and named Maury-Venel, after the research professor and his PhD student) has proved to be fruitful and relevant for modelling highly congested situations. It’s part of a theory developed in the 1970s, known as the ‘lottery method’.” A macroscopic version of this model, which was easy to write but awful to study, obsessed the mathematician for years, until he had a discussion with Filippo Santambrogio, a colleague. The latter identified in the problem what is known as a ‘gradient flow’ type in the Wasserstein space. “The crowd as a whole can be seen as a single point in an infinite dimensional space sliding along the line of greatest slope of a certain function, which here is the overall dissatisfaction of the crowd.”

Since then, a good proportion of his research focuses on this new model of crowd movement both from a theoretical point of view and from an applied perspective which is increasingly directed towards the social sciences. “Certain physical laws considered ‘immutable’ are invalidated, unlike in the modelling of ‘traditional’ mechanical phenomena,” explains the mathematician. In fact, a grain immersed in a fluid is not mathematically equivalent to a person in a crowd. “The models may appear to be identical except that our new 'grains' have cognitive abilities and decision-making powers, which challenges the law of action and reaction. Also, the interaction matrices involved lose their symmetry. The spectrum is no longer real and this leads to very different behaviours from mechanical systems.”

The professor is currently working on security in large gatherings. “A PhD is being funded by the central laboratory of the Police Prefecture (LCPP) which aims to model the movements of spectators along the Seine during the opening ceremony of the 2024 Olympic Games.”

In 2011, while still a junior member of the University Institute of France (IUF), Bertrand Maury took the opportunity to be at the forefront of the Mathematics and Business Study Weeks. They were set up within the framework of the Mathematics and Business Research Group (GdR) which he had founded shortly before. Two years later, this GdR became the Labex AMIES (Agency for Mathematics in Interaction with Business and Society). “The objective was to organise the mathematics community around themes relevant to business.” About thirty of these weeks have taken place in France to date.

In 2016, his colleague and fellow mathematician, Sylvain Faure also set up Signactif, a start-up recently acquired by Eurecam. “To begin with, we designed dynamic and ‘intelligent’ signage to regulate, in real time and with the help of LED panels, the flow of crowds in trade fairs.” They have worked with more than fifty partners, including some from abroad.

Following his own path

Although Bertrand Maury devotes a quarter of his time to business/research relations, the rest is given over to research and teaching. “These two activities are very closely linked,” points out Bertrand Maury. “My most recent research informs my lectures and vice-versa. For example, I’m pursuing research on the spread of opinion on social networks following a discussion about this topic with my students.” The research professor has just been awarded a 2022 silver medal by the CNRS, about which he is pleased and just a little astonished. “It was undoubtedly awarded to me in recognition of a specific way of working: never hesitating to take the time to reach out to other subjects, to build bridges between disciplines, to accept failure and sometimes not to publish.”

The mathematician has always followed his intuition and his aspirations (and savoured his freedom as a teacher and researcher), but he advises his students to find their speciality early on, so as to be able to better “do things out of passion and be open to more than just academic research.”