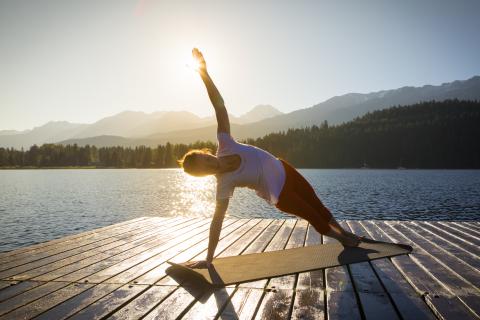 Christine Le Scanff: Healing the mind by exercising the body

Christine Le Scanff is a teacher and researcher at the Complexity, Innovation, Motor Skills and Sports Activities Laboratory (CIAMS – Université Paris-Saclay, Université d’Orléans) and Director of the Graduate School of Sport, Movement and Human Factors at Université Paris-Saclay. She is also a sports teacher, psychologist and specialist in stress and body-mind links. Thanks to her atypical scientific background, she has acquired recognised cross-disciplinary expertise which is applied in very different sectors. She is one of the few women to have held the position of director of a STAPS (Sciences and techniques of physical and sports activities) university out of the 50 in France, and at the same time directed the ‘Sciences of sport, motor skills and human movement’ doctoral school  for 10 years.

Coming from a working class background, Christine Le Scanff had no choice but to finance her studies by taking the competitive examination to become a physical education teacher at the age of 21. This led to two parallel lives: that of a student studying for a degree in educational sciences, and that of a physical education and sports teacher in a secondary school. She continued with the brand new training courses in Science and techniques of physical and sports activities STAPS (Master 1 and 2) created at the Université de Nanterre in the 1980s.

“When I started my studies, there was no research in sports science,” Christine Le Scanff recalls. “As a dancer myself, I became interested in the links between body and mind very early on, devoting my Master's degree (DEA) to the sociology of the body. Observing dancers according to the types of dance practised (classical, jazz, contemporary, aerobics), I deduced sociological models. I analysed their food, cultural habits, etc.” As a young researcher, Christine Le Scanff was one of the first to take an interest in sophrology, anthropology and all the processes of modification of consciousness, including mental manipulation and oriental philosophies (Buddhism, yoga, Taoism). Jean Rivolier, one of France's stress specialists, founder of the Psychology laboratory at the University of Reims and a long-time doctor on polar expeditions, agreed to direct her research. She became the first student to defend a thesis in STAPS, in 1990 (Université Paris Descartes). This research led to the writing of a pioneering book for the time (La Conscience modifiée - Modified Consciousness) and guided her subsequent career. After her thesis, Christine Le Scanff moved to San Diego as an assistant professor to train in behavioural and cognitive therapy, sports psychology and to perfect her English.

Back in France, she was recruited by the French National Institute of Sport and Physical Education (INSEP) - which became the National Institute of Sport, Expertise and Performance in 2009 - and joined the Sport Psychology laboratory to carry out her research and coach the French kayaking team in preparation for the 1992 Barcelona Summer Olympics. She went on to work with the French sailing teams, which she accompanied around the world for eight years. She obtained a position as a lecturer at the University of Caen and launched the first university diploma in mental preparation in Reims. Christine Le Scanff completed her training with a psychology diploma from the CNAM (National Conservatory of Arts and Crafts) and, among other things, training in hypnosis.

Appointed professor at the University of Reims, she stayed there for five years, contributing in particular to the creation of the STAPS Faculty of this university. In 2004, Christine Le Scanff joined the STAPS Faculty of Orsay (now the Faculty of Sports Sciences of Université Paris-Saclay) as a professor at CIAMS and, at the same time, she became deputy director in charge of research. Three years later, she took over leadership of the Faculty and a year later, in 2008, that of the doctoral school of Sports, Motor Skills and Human Movement Sciences, one of two in France.

“When my career started, there was little talk of stress. But I have been studying it for over thirty years!” Christine Le Scanff began by observing, in collaboration with the European Space Agency (ESA), the reactions of astronauts confined in small capsules. She also worked with the anti-crime brigades (BAC) of the French national police force, then with the French National Ski and Mountaineering School (ENSA). “In my book ʻLes aventuriers de l'extrêmeʼ (Extreme Adventurers), I analysed why some people hold out, while others 'crack',” the researcher explains. “I realised that these people had particular personal journeys, with significant shortcomings. This research has highlighted the concept of alexithymia, i.e. the difficulty of recognising and expressing emotions. These people act on their emotions. The search for sensation is there to blur the emotional message.”

This notion is very prevalent among sportsmen and women practising extreme sports, those who seek adrenaline 'shots', such as paragliding or base-jumping. Later, the researcher linked this concept to another: that of parental attachment, which refers to instabilities in the parent-child bond: absence of a father, an overly possessive or, on the contrary, ‘avoidant’ mother, competition with siblings. She identifies these problems, which are the same as for drug addicts or alcoholics, during interviews. “We found this same link in athletes, extreme or not, but with eating or drinking disorders,” Christine Le Scanff recalls. “Their family fragility clearly leads to risky behaviours and possibly susceptibility to doping.” She has been working for several years with the Computer Science Laboratory for Mechanics and Engineering Sciences, LIMSI (which would become the Interdisciplinary Digital Science Laboratory, LISN, in January 2021) on a stress management application in conjunction with IBM France.

Combating the harm of a sedentary lifestyle

Convinced of the benefits of exercise, the researcher has shown that yoga, which she teaches, can be an effective remedy for stress hormones. “With age, it is the lack of activity that reinforces all the causes of mortality,” says Christine Le Scanff, who has long made this one of her most important areas of work. “As early as my dissertation in physical education, all the studies I had consulted converged on the same result: you gain 10 years of age thanks to the benefits of physical activity!” Since then, the researcher has been spreading this message around her, coaching her family and friends.

From the STAPS Faculty to the Graduate school

After continuing to develop the STAPS programme at Orsay, for which the enthusiasm of young people has never waned, Christine Le Scanff is now heading the Graduate School of Sport, Movement and Human Factors at Université Paris-Saclay. The Graduate School (GS) is developing its courses towards international masters in English to attract international students and offers several university diplomas (DU) aimed at professionals from different sectors, such as the DU Performance optimisation techniques (TOP) for mental preparation and management of extreme conditions, in collaboration with an army doctor and a RAID police officer. Other DUs relate to manual therapies or pain management. In January 2021, the GS organised an international seminar with round-table discussions to strengthen links with businesses and entrepreneurship. Next sessions: the 2024 Summer Olympics in Paris “with sports students and teachers on the starting block!” 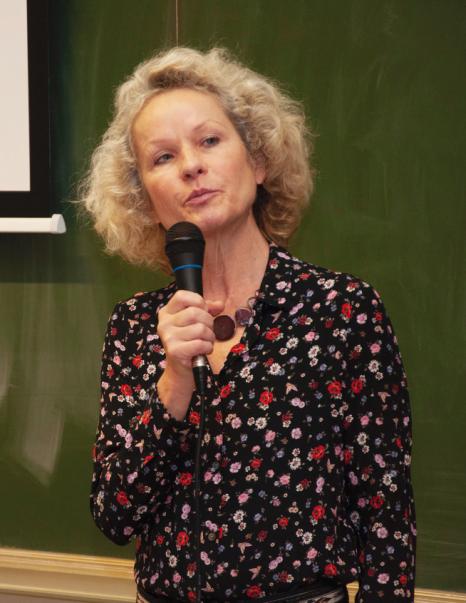