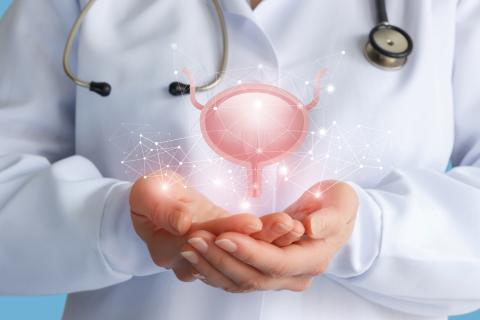 As a result of the Elpis project developed in the Neuromuscular Disability: Physiopathology, Biotherapy and Applied Pharmacology Laboratory (END-ICAP – Université Paris-Saclay, UVSQ, Inserm), the biotechnology start-up EG427 has launched a new precision gene therapy to treat neurological urinary disorders. This will greatly alter the life of patients suffering with neurogenic bladder. After raising €12 million, the start-up aims to begin clinical trials in 2023.

The start-up EG427 is developing a treatment to solve bladder dysfunction related to spinal cord injuries for patients with neurological diseases. The solution developed (a precision gene therapy platform based on a modified herpes virus) is the result of the Elpis project which is led by professors François Giuliano, Pierre Denys and Alberto Epstein from the Neuromuscular Disability: Physiopathology, Biotherapy and Applied Pharmacology Laboratory (END-ICAP – Université Paris-Saclay, UVSQ, Inserm) and AP-HP. Since 2013, thanks to their expertise with herpes viruses and urogenital disorders, they have been working on developing technology to treat bladder dysfunction in patients with spinal cord injuries and to restore urinary continence.

In paraplegic or quadriplegic patients, the central nervous system loses control of certain parts of the body, including the bladder, which then causes urinary problems. The organ, which contracts abnormally, causes either urine to flow back to the kidneys or involuntary urination. Any of the available medications are not suitable for controlling abnormal bladder contractions. Over time, renal function is destroyed and this results in significant urinary infections.

The team focused on precision gene therapy based on the use of defective herpes simplex virus vectors (HSV-1). They produce a controlled version of the gene to treat patients using one of the properties of the herpes virus - namely its ability to lie dormant in the neurons in the peripheral nervous system. By modifying it, they are able to inhibit the signals responsible for the abnormal contractions which occur with neurogenic bladder. “It’s like a sleeping pill given continuously to Sleeping Beauty,” explains Philippe Chambon, the CEO, co-founder and a shareholder of the start-up EG427. Present in 80% of the humans, the herpes virus type 1 targets the cells of the epidermis. Once infected, they die when they replicate the virus which spreads through the nerve endings to the nuclei of the cells, where it settles. “Use of the area responsible for this latency allows the continuous expression of new genetic sequences. In the case of neurogenic bladder, it’s a gene which inhibits the activity of sensory neurons.”

From guidance to start-up

The three researchers from the END-ICAP laboratory were significantly supported in their work by the ERA-NET Neuron European programme which supports clinical, basic and transfer research. Then, thanks to promising in vitro and in vivo studies, the Elpis project was awarded a development programme by SATT Paris-Saclay in 2016. This has enabled the team to conduct pre-clinical studies, obtain proof of concept and file a patent. At the start of 2019, Philippe Chambon obtained a licence for the project. This means that he negotiated an agreement with SATT to obtain the rights to his intellectual property and patent. He then created the EG427 start-up. “E and G are the initials of the inventors of the technology, François Giuliano and Alberto Epstein. 4 and 27 are the gene numbers which are removed from the genetic sequence of the herpes vector to eliminate its ability to multiply,” explains the start-up’s founder. After a new series of studies, the healthcare venture capital expert raised €12 million to launch the development of this young pharmaceutical company and recruit its team. “We’re the only company in Europe to use this technique of precision gene therapy based on a modified herpes virus. There are a few players in the United States specialising in the same area of treatment as us. We’re not in direct competition with them, but it confirms that our approach is in a flourishing market.”

The treatment currently under development has to pass through a series of preclinical stages to check its reliability. It must be proven that it does not cause side effects in animal models, as well as that it is able to reach a production capacity which meets regulatory requirements. EG427 plans to achieve this compliance with the European Medicines Agency (EMA) and the Food and Drug Administration (FDA) in the United States and aims to begin clinical trials in 2023.