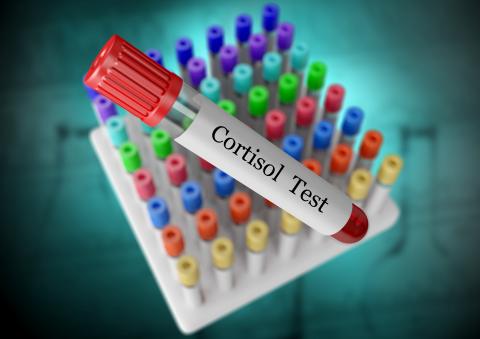 The macronodular adrenal hyperplasia form of Cushing’s syndrome is a rare disease, an even more unusual form of which is food dependent. A team of researchers from no fewer than six countries working under the supervision of Peter Kamenický, a university lecturer in endocrinology at the Bicêtre Hospital (university hospital centre) and director of the Endocrine physiology and pathophysiology laboratory (PHYSENDO – Univ. Paris-Saclay, Inserm), has identified the genetic cause.  Thirty years after the condition was first documented, this discovery paves the way to earlier diagnosis and better management of patients. 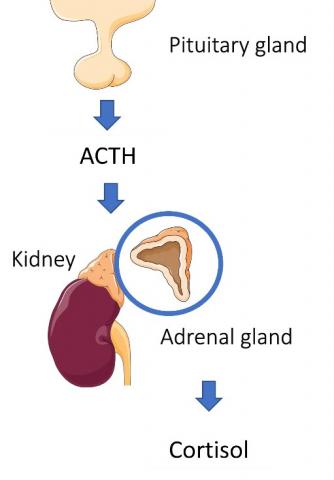 Diagram showing the production of cortisol by the adrenal glands under the stimulation of the adrenocorticotropin hormone (ACTH) released by the pituitary gland (Credit: Servier)

Cushing’s syndrome commonly results from treatment with exogenous glucocorticoids for autoimmune or inflammatory diseases, such as rheumatoid arthritis. However, endogenous Cushing’s syndrome is caused by hypercortisolism, i.e. an excessive production of cortisol in the body. This hormone is secreted by the adrenal glands which are located above the kidneys and is stimulated by another hormone, adrenocorticotropin, which is produced by the pituitary gland.

Cortisol plays an essential role in blood sugar levels and the metabolism of fats, proteins and carbohydrates. The symptoms associated with hypercortisolism are multiple, the most common being a redistribution of fat to the abdomen combined with muscle atrophy. More randomly, it is accompanied by obesity, osteoporosis, diabetes mellitus, high blood pressure or a tendency to depression. Cardiovascular risks are then clearly higher.

Rare forms, one of which is linked to food

Peter Kamenický’s team have been carrying out research work in the laboratory on endocrine tumorigenesis, i.e. the mechanism of development of endocrine tumours, particularly originating from the pituitary and adrenal glands. The researcher describes the main endogenous causes of Cushing's syndrome as follows. “Typically, tumours in the pituitary gland over-secrete adrenocorticotropin, which over-stimulates the adrenal glands and leads to hypercortisolism. However, there are also rarer forms of the syndrome which are of adrenal origin, where the adrenal glands themselves produce too much cortisol.”

In this case, the hypercortisolism may be related to macronodular adrenal hyperplasia, a condition characterised by large adrenal glands covered with bilateral macronodules. “In this form, however, there’s an even rarer subgroup in which the production of excess cortisol, and probably also the increase in adrenal volume, is determined by the presence of a receptor which does not belong in the adrenal glands,” adds the researcher. “This is known as illegitimate or aberrant expression of the GIP receptor.”

The GIP (Glucose-dependent insulinotropic polypeptide) is a gastrointestinal peptide produced by cells in the small intestine in response to food intake. Patients with this very rare form of GIP-dependent (or food-dependent) Cushing’s syndrome have very low cortisol levels when their stomach is empty which increase after eating food, as well as an aberrant expression of GIP receptors in their adrenal glands.

A different genetic origin for each form of the disease

Together with his team, the researcher took up the subject and published their first report in 2017. However, it was only the study of a case of familial presentation (the disease occurs in several members of the same family) which facilitated an important advance in the understanding of the pathogenesis of this enigmatic disease.

“It all started with the common observation of a deletion of the short arm of chromosome 1,” relates Fanny Chasseloup, an endocrinologist and PhD student under the supervision of Peter Kamenický. “We looked to see if there were any interesting genetic events at this level and by cross-referencing the sequencing data, we identified a mutation in the KDM1A gene coding for lysine demethylase. It was therefore necessary to verify the involvement of this event in macronodular adrenal hyperplasia.”

An international collaboration to establish a patient cohort

As this is a very rare disease, the laboratory worked very closely with Canada, as well as Belgium, Italy, Greece and Holland in order to collect cases of macronodular adrenal hyperplasia, including control cases without GIP receptor expression.

“In this way, we built up a collection of patient tissues,” continues Fanny Chasseloup. “We found exactly the same genetic event, i.e. germline mutations and a loss of the short arm of chromosome 1 in all these tissues.”

The important role played by the study's control population is worthy of note because the teams found that this genetic event is not present in all patients with macronodular adrenal hyperplasia, but only in those with food-dependent Cushing's syndrome. “This result confirmed the involvement of this genetic event in the occurrence of the disease,” points out the young researcher.

A genetic discovery which paves the way to better diagnosis

The combination of the inherited germline mutation of KDM1A and the loss of the short arm of chromosome 1 in the adrenal tissue leads to the gene ceasing to function. “The lack of expression of the protein encoded by this tumour suppressor gene leads to the development of adrenal lesions,” sums up Peter Kamenický.

KDM1A is also a transcriptional repressor, i.e. it has the ability to prevent the expression of certain genes. Loss of function of KDM1A in adrenal tissue results in aberrant expression of G protein-coupled receptors, including the GIP receptor.

These discoveries represent a significant breakthrough towards the early identification of the disease in families at risk, as well as better management of the disease, and are the subject of a patent application. This is particularly important as mutations in KDM1A also contribute to a predisposition to multiple myeloma and perhaps to other types of cancer. They also raise new questions, in particular about the aberrant expression of receptors other than GIP receptors and their role in the development of adrenal lesions, as well as the role of the KDM1A mutation in the development of myeloma.