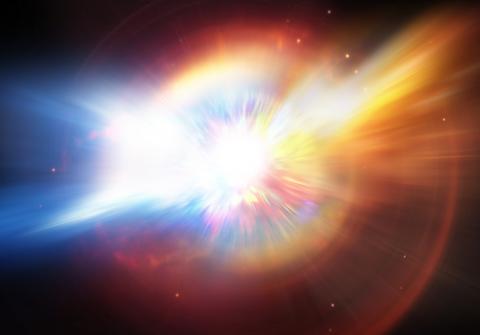 Gigantic magnetic fields at the origin of hypernovae

Stellar explosions which remain visible in the sky for several months, known as supernovae, are the most extreme phenomena in the universe. Hypernovae are the most intense of these and are characterised by a phenomenally amplified magnetic field. This process still holds many secrets that the MagBURST project led by Jérôme Guilet of the Department of Astrophysics / Astrophysics, Instrumentation and Modelling at Paris-Saclay is trying to decipher.

Supernovae are amongst the brightest celestial objects. The first confirmed sighting of a supernova was in the year 185, although there are records of similar celestial objects as early as the fourth century BC. These powerful explosions follow the collapse of the core of a massive star which has exhausted its nuclear fuel. The outer layers of the star are then ejected, leaving behind a neutron star. This is sometimes called a magnetar when it has the strongest magnetic fields in the universe. Within the framework of the MagBURST project (Magnetars as engines of hypernovae and gamma-rays bursts), which has received an ERC Starting Grant, Jérôme Guilet, a researcher at the Department of Astrophysics / Astrophysics, Instrumentation and Modelling (Dap/AIM - Université Paris-Saclay, CNRS, CEA, Université de Paris), has been studying hypernovae - phenomena of colossal power which drive extreme supernovae.

The supernovae community has already developed a number of phenomenological models for extreme magnetar explosions. “These models reproduce magnetars quite well if their rotation and magnetic field are adjusted appropriately,” explains Jérôme Guilet. “The aim with this project is to study the evolution of magnetic fields from the formation of neutron stars and the consequences on the extreme explosions.”

Two mechanisms are potentially responsible for such an amplification of the magnetic field, which can reach values of 1015 Gauss (G), or 1011 Tesla (T) - a billion times higher than the most intense artificial magnetic fields. One is called the convective dynamo effect and is similar to the movements of the Earth's liquid core which generates the Earth's magnetic field. The other is magneto-rotational instability, or the interaction between the rotation of the star and its magnetic field. Magneto-rotational instability is well known to astrophysicists studying accretion disks, but is less well known in the supernova community. However, the magnetic field amplification efficiency of these two mechanisms remains difficult to assess. 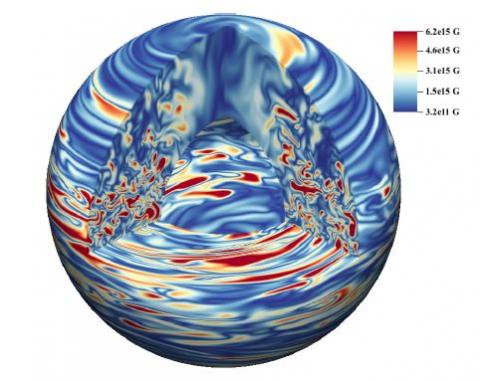 Astrophysical fluid dynamics often faces computational challenges. In the case of magnetars, for example, the phenomena are intrinsically three-dimensional and very sensitive to small spatial scales, and as a result calculation times suffer. Models are therefore generally limited to a certain part of the star. They show an amplification of the magnetic field, but this is difficult to comprehend in its entirety.

Jérôme Guilet and his team use a mathematical approximation. This involves filtering out sound waves which are not very useful for studying the subsonic turbulence in the heart of the star. This simplification significantly reduces the computational complexity and provides a better resolution or spatial scale. Using this method, the researcher can show that the convective dynamo mechanism is the most effective in amplifying the magnetic field and creating magnetars. Through his simulations, he is able to obtain the field values deduced from the observations. This is a first important step in the understanding of these intricate mechanisms.

The simulations have also led to another unexpected observation. “We’ve observed that the magnetic dipole moment is always perpendicular to the star's axis of rotation, whereas it was generally assumed to be aligned,” explains Jérôme Guilet. He also looked at more complex magnetic fields, known as multipolar fields, which proved to be less effective at producing extreme explosions than the dipolar component.

“The challenge now is to go beyond just an order of magnitude and reproduce the distribution of the magnetic field. We also want to understand the influence of the star's own parameters, such as its rotation or collapsing mass, on this magnetic field. This will require links to be made between several fields of astrophysics. It’s the next step,” believes Jérôme Guilet.

Scanning the Universe for clues

The great difficulty in astrophysics is constraining the model and setting parameters. To date, astrophysicists have few clues about the mechanisms behind extreme explosions. Observations of the skies offer only light curves where the light intensity is a function of time or light spectra. Using their models, scientists reconstruct the supernova from their simulated magnetar and compare it with their observations. These constraints are indirect and depend on the model used. Jérôme Guilet’s study also focuses on the mechanism of magnetar formation, which represents just a few seconds of a star core’s lifetime. This is far less than the days or weeks of observations needed for the overall lifetime of a supernova.

There are several avenues of hope for Jérôme Guilet and others. One of these is that the electromagnetic signals measured potentially contain other information. Recent observations suggest, for example, that fast bursts of radio waves or short radio frequency oscillations from a distant universe may be related to the dissipation of magnetic energy from a magnetar. If regular temporal oscillations of these signals were to be detected, the rotational speed of the magnetar could be determined.

In the longer term, new projects and facilities will soon be available to the scientific community. The satellite SVOM, which will be launched at the end of 2022, will capture gamma-ray bursts from explosions, allowing them to be observed at much greater distances and in greater numbers. This is also the aim of the Vera C. Rubin observatory which will provide an unprecedented amount of data by regularly scanning a large area of the sky.

Other phenomena also show great potential, such as the gravitational waves or ripples in spacetime predicted by Einstein and observed for the first time in 2015. They promise to provide many clues about magnetars and hypernovae. However, we will have to be patient, as the new generation of sufficiently powerful gravitational-wave detectors, such as the Cosmic Explorer and the Einstein Telescope, will not be ready for another ten years or so.

“We can already observe supernovas occurring in our galaxy. In principle, two or three appear every century. There is nothing to suggest that they would form a magnetar, as this only happens in 10-20% of explosions. As this event is relatively rare, no observations have yet been made using gravitational waves. We would need a bit of luck. It would give us a wealth of information. This is why we need to push ahead further with our observations,” anticipates Jérôme Guilet.