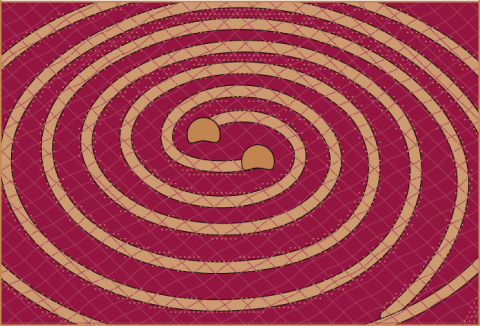 Gravitational waves: listening to the vibrations of the universe

Gravitational waves were theorised over 100 years ago by Albert Einstein and can now be seen thanks to very high-tech instruments called interferometers. What interest do these waves have for scientists and how will they be measured in the future?

Gravitational waves were predicted by Albert Einstein in 1916, several months after he had published his groundbreaking work on general relativity. They are the result of the most gigantic phenomena in the universe. One example of this is when two black holes attract one another and merge. The mass and energy involved in this process are such that they distort space-time. This disturbance then spreads throughout the universe. The physicists then guessed that only extreme phenomena, such as the merging of black holes or the explosion of very dense stars, were capable of distorting space-time and generating gravitational waves.

However, space-time is something very rigid and only small disturbances result from its alteration. Over the past 50 years, the challenge for physicists throughout the world was to design a device capable of perceiving the minute movements of space-time (in the order of 10-18 m, or one billionth of a billionth of a metre). In the 1970s, the American physicist, Rainer Weiss suggested using interferometers to study the interference caused by gravitational waves. This is the concept which is still used by the community today.

“When two black holes revolve around each other before merging, they emit gravitational waves, lose energy and spin faster and faster until they merge. Two coalesced (merged) black holes are typically the kind of object which can be observed,” explains Nicolas Leroy, who directs the Gravitational Waves team at the Astroparticles, Astrophysics and Cosmology hub (A2C) from the Irène Joliot-Curie – Physics of Two Infinities Laboratory (IJCLab – Univ. Paris-Saclay, Univ. Paris Cité, CNRS). In 2015, the merging of two black holes was observed for the first time thanks to two interferometers at the Laser Interferometer Gravitational-wave Observatory (LIGO) based in Livingston (Louisiana) and at Hanford (Washington) in the United States. In addition to pairs of black holes, scientists are now able to study gravitational waves from the merger of a neutron star and a black hole, or two neutron stars, thanks in particular to Virgo, the interferometer based in Pisa in Italy and resulting from a European collaboration.

An interferometer is an instrument capable of measuring the interference it experiences through the phase shift of its laser. In an L-shaped set-up, the same laser is split into two beams, each of which meets a mirror at a precisely known distance. After reflection, the beams return to the point of separation and reunite in perfect alignment. When a gravitational wave passes through the Earth, i.e. when space-time is disturbed in the vicinity of the Earth, the distances covered by the laser beams are altered. As a result, in the final stage, the reunited laser is out of sync. “As it travels through space, a gravitational wave contracts space in one direction and expands it by 90°. An interferometer gives you the optical path in one direction relative to another at 90°. As a result, it’s a perfect and infinitely precise instrument for measuring one distance from another,” concludes Nicolas Leroy. During the 19th century, when they were being designed, interferometers were used to confirm or refute the theory of ether, which had been advocated since the 17th century by Descartes and Newton. This hypothesis, disproved with the help of interferometers, implied that celestial bodies left behind ‘vortices’ of ether following their movement.

The major drawback of an interferometer is that the instrument receives all the perturbations coming from the Universe as a whole. “An interferometer is closer to an antenna than a telescope,” laughs Nicolas Leroy. To address this, it was essential to build several interferometers on Earth – the two at LIGO, Virgo and the Kamioka Gravitational Wave Detector (KAGRA) – an underground interferometer at the University of Tokyo. Thanks to the time-of-flight technique, by cross-referencing the data received by each terrestrial interferometer, researchers around the world are able to precisely define the zone of a wave’s origin. In 2007, the first collaboration took place between the LIGO and Virgo teams. “It was only a few years later, in 2015, that this collaboration proved to be a phenomenal success,” says Nicolas Leroy with pride.

Two future instruments to broaden the field of observation

Far from being content with this success, the scientific community is looking to the future, and the future of gravitational wave detection will be played out in space... and underground. The Laser Interferometer Space Antenna (LISA) is an international project which will be completed in 2036. This space interferometer, currently under development, will consist of three satellites, each emitting a laser. “Our perception of the electromagnetic field has broadened over time and we’re now able to see the entire spectrum (visible, ultraviolet, infrared, radio waves, etc.). With LISA, we’ll be able to observe new frequencies which are different from those we get on Earth. LISA will observe the merging of supermassive black holes, as well as the whole life of a binary system and the whole signal modulation. This will allow us to test general relativity in a very thorough way,” adds Nicolas Leroy. In addition, the Einstein Telescope project, a new underground interferometer which will greatly increase the sensitivity of terrestrial detectors, is being developed. “Much like LISA, the Einstein Telescope will also be triangular in shape, but will consist of six interferometers,” the physicist from the IJCLab says. This project, which is the result of a European collaboration, will be completed by 2040.

Within Université Paris-Saclay, researchers at the IJCLab and the Institute for Research on the Fundamental Laws of the Universe (Irfu – Univ. Paris-Saclay, CEA) are actively contributing to the global effort to detect and analyse gravitational waves and to develop these tools of the future. They are conducting analytical and instrument preparations for LISA. “I’m working on both data analysis and the improvement of sensors,” explains Nicolas Leroy. “At the moment, I’m interested in squeezing – a technique which uses the quantum entanglement effect to improve gravitational wave detectors. This is the equivalent of trying to increase the laser power of a detector by using quantum effects rather than the power itself.”

Gravitational waves have been fascinating physicists for over a century. And from the Saclay plateau to the Earth’s orbit, their study continues to captivate these scientists.