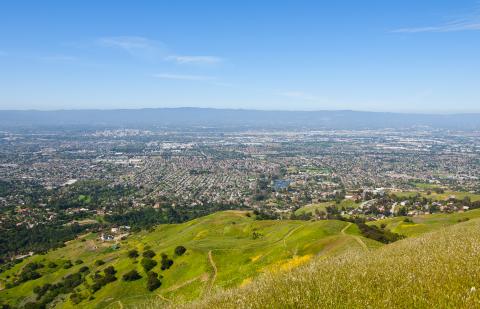 Highlights from a Franco-American webinar on climate & biodiversity solutions

On Thursday 28 January, some 350 people tuned in to Université Paris Saclay’s YouTube channel to follow the first in a series of webinars on biodiversity and climate solutions for natural and agricultural spaces on urban edges. The introductory webinar brought together a group of American and French experts working in the urbanising landscapes of the Silicon Valley and Paris-Saclay, and was hosted by the online media website, The Conversation. We take a look back at the introductory webinar and this successful Franco-American collaboration.

“Climate and biodiversity solutions: Agricultural and natural spaces, keys to resilience” was organised by Université Paris-Saclay, Terre & Cité, the Santa Clara Valley Open Space Authority, the Nature Conservancy, the EIT Climate-KIC and The Conversation. Broadcast on Université Paris-Saclay’s YouTube channel on Thursday 28 January, some 350 students, researchers, lecturers, local stakeholders, and environmental professionals and experts from both sides of the Atlantic followed the live event.

The panel of experts included:

The webinar was hosted by Fabrice Rousselet from The Conversation.

During this first webinar, the experts explored and shared case studies and applied research from Paris-Saclay in Ile de France and the Santa Clara Valley in California; peri-urban areas which are known for their rich and valuable natural and agricultural spaces. On the Plateau de Saclay alone, 10,168 acres are classified as an Agricultural and Forest Natural Protected Area (ZPNAF) and in the Santa Clara Valley, half of the region’s 27,000 acres of farmland are considered to be at risk of urban development in the next 30 years.

Together, the experts discussed how the conversation of these natural spaces contributes to sustainability and develops socioecological resilience on urban edges. Local conservation organisations Terre & Cité from Paris-Saclay and the Santa Clara Valley Open Space Authority in California explored who are the key players tackling global environmental issues on a local level.

While the webinar was mainly in English, simultaneous interpreters translated the speakers from French to English and English to French to ensure that the event was accessible for all participants, regardless of their mother tongue.

The webinar gave participants the chance to ask questions and share their ideas for the series of conferences to come. Among the many questions asked in the Q&A, the role of public legislation in environmental conservation and the impact of transportation on sustainable development were key themes that prompted considerable interest from the audience.

Four more conferences are planned for the rest of the series. The next conference is planned to take place before the summer and is set to address how land planning can be used as a tool to preserve biodiversity. In the meantime, participants have been invited to share their feedback on the introductory webinar and their ideas for the upcoming conferences.

If you were unavailable to follow the live introductory webinar on 28 January, you can watch the webinar on Université Paris-Saclay’s YouTube channel here.