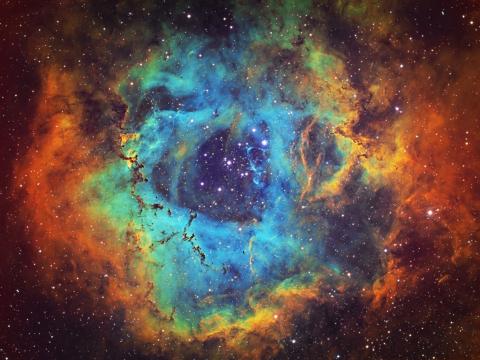 The creation of young objects in space and their attendant future planets depends on many interacting factors. Led by Anaëlle Maury, a researcher at the Astrophysics, Instrumentation and Modelling Laboratory in Paris-Saclay (AIM – Université Paris-Saclay, CNRS, CEA, Université de Paris), the MagneticYSOs project , which has been awarded an ERC Starting Grant, focuses on the magnetic component of this process in particular.

Every scientific discipline has its own ability to generate powerful images, and in this respect astrophysics is certainly one of the most fascinating. How can you not marvel at the idea of observing the clouds of dust and gas which swirl around the magnetic fluxes surrounding stars in the process of being born, even if they are several tens of light years away?

If this visually beautiful aspect is remarkable, so is the originality and complexity of the project being led by Anaëlle Maury, as this project is aiming to understand the role magnetic fields play in the formation of stars and planets. This role, which was still poorly understood when MagneticYSOs started five years ago, requires a complex approach in which long wavelength radio astronomical telescopes and digital simulations are combined. This approach works thanks to a constant dialogue between experts in that the models guide where the observations are to be made and in return the results of these observations feed the simulations. The physical ingredients interacting in molecular clouds are examined, from magnetic fields to turbulence to gravitational interactions. Anaëlle Maury highlights the complexity inherent in this way of working, saying “It’s really a very subtle interaction which requires working in real time. A computer doesn't do this on its own. Researchers from different fields have to understand each other when we don't always speak the same language.”

A reliable method with important results

This way of working has led to a first major result which in itself validates the reliability of the method chosen to map the magnetic field. This involves using the polarized radiation emitted by the dust grains surrounding young stars. This dust, although very cold, emits energy in the form of photons. This radiation is not uniform as the grains are ellipsoidal and not spherical. If they align with the magnetic field which surrounds them, it results in a polarization of the received light which is then used to trace the topology of the magnetic field. As Anaëlle Maury says herself “This is a very strong result. We’ve shown that you can actually believe this signal for complex objects, which was not established sufficiently robustly enough when the project started.”

The evident reliability of this approach paved the way for the second result put forward by the MagneticYSOs team - namely the proactive role played by the magnetic field. As non-neutral gases do not cross the magnetic field lines well, the magnetic field slows them down, regulating the amount of angular momentum given to the star during its formation. This slowing down prevents the centrifugal force from overcoming the gravitational attraction, which would lead to the star’s premature explosion. This interaction also effects the size of the future star and the disc of dust surrounding it, which is where the planets form.

There have been some unexpected results, as is often the case with particularly complex research projects. “Although it’s a discovery which still needs to be confirmed, the observed polarization of these dusts has also helped to restrict the size of these solid grains. They are much bigger than previously thought, with a maximum size of up to a fraction of a millimetre.” Although this may seem small, it is already one hundred times larger than in the interstellar medium where it’s barely a fraction of a micrometre. This result calls into question current understanding about the initial stages in the formation of solid bodies around young stars, i.e. corteges of planets similar to the one we live in. Until now, planets were thought to form from a debris disc around an already formed star. The size of this debris around forming stars suggests that the process begins much earlier. Although this data does not radically change the view we have had up until now, they do argue in favour of revisiting the process of how planets form.

The MagneticYSOS project, which began in 2016 after receiving financial support from the European Research Council (ERC) which enabled the researcher to set up a group by recruiting three post-doctoral students and two PhD students, is now nearing its end. All the objectives set have been achieved. What is Anaëlle Maury aiming for next? “It was a great experience, especially considering the results we achieved. I had a great time, although it was also intense. I now need to refocus on a more personal research approach and find the next questions which will light my fire.” Other significant projects are already underway, such as the ECOGAL project led by Patrick Hennebelle, who collaborated early on with the MagneticYSOs project and who is exploring this subject in other areas. One of the chosen avenues is to broaden observations into the area of infrared thanks to large-scale equipment currently in preparation, such as the James Webb Space Telescope, scheduled for launch at the end of 2021, and the Extremely Large Telescope, expected by 2025.

All the processes governing the formation of planets from circumstellar dust clouds are not yet known and many questions remain unanswered. What are the grains made of? Why are they the shape they are and why do they align so well with the magnetic field? If it is established that they are covered in ice, what is it made of? How do they behave with respect to the kinematics of the very hot gases surrounding a protostar? The answers to these questions will provide valuable information about prebiotic chemistry, including an explanation for the presence of water and carbon chains on young planets. From the birth of stars to the birth of life itself.