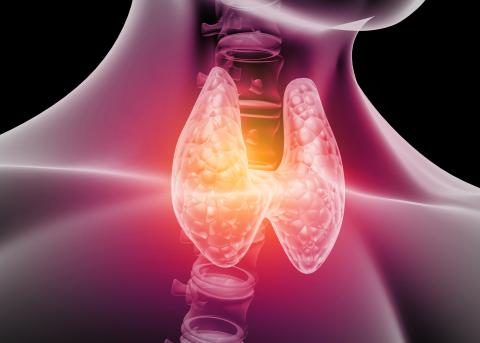 Martin Schlumberger is an oncologist at Gustave Roussy and Professor of Clinical Medicine at the Faculty of Medicine, Université Paris-Saclay. A researcher and clinical doctor, he has been involved in the fight against thyroid cancer for 40 years, making a decisive contribution to remarkable progress to find a cure. With 10,000 new cases each year in France, this cancer is the fifth most frequent cancer affecting mostly young women.

As a medical student, Martin Schlumberger was attracted to endocrinology. When he did his semester interning with Professor Tubiana, a specialist in nuclear medicine at the Gustave Roussy Institute, he was “won over” by the dual clinical/research approach, which was not very widespread at the time. Martin Schlumberger decided to continue his thesis with him. “I developed the first thyroglobulin trial in Europe, a marker for thyroid cancer,” he recalls. Later, a two-year training in nuclear medicine at CEA-INSTN in Saclay and a post-doc in Los Angeles brought him straight back to Gustave Roussy where he became Head of Clinic in 1980 in Professor Tubiana’s department. Since then, he has tirelessly traced the path of thyroid cancer, exploring all facets from the outset: fundamental, genomic, radiobiological and biological research with analysis of tumour markers, and therapeutic trials, most of which are academic trials.

In 1986, radiation from the explosion of the Chernobyl nuclear power plant caused thyroid cancer in children and teenagers in the region. Encouraged by the European Union and supported by an EDF charitable programme, Martin Schlumberger would make more than 50 round trips in 15 years to a medical centre in Belarus. There, he delivered medicines, trained doctors and treated nearly 2,000 children. This humanitarian experience advanced research, in particular to find a genomic signature to differentiate spontaneous non-radiation-induced cancers from those that are radiation-induced. Thanks to a collaboration with Sylvie Chevillard's team at the CEA in Fontenay-aux-Roses, this long-term project will soon be published in 2021.

Easing the treatment of benign tumours

As the widespread use of ultrasound has made it possible to detect more and more (by a factor of 7 to 8 between 1980 and 2010) “small tumours” causing little harm, Martin Schlumberger is developing a clinical diagnosis to identify them and is developing less aggressive treatments. “It is no longer a question of treating all thyroid cancers as we did when I arrived in Villejuif in 1980,” he says. “For small tumours of less than one centimetre in diameter, we offer active monitoring, only operating if there is a significant increase in the tumour, which occurs after 10 years in 8% of cases,” researcher Mr Schlumberger explains. Those patients undergoing surgery benefit not only from limited surgery but also from a reduction, or even avoidance in 80% of cases, of their treatment with radioactive iodine-131 after their operation.

For advanced thyroid cancers, the clinician has been working with his team for the past 20 years to develop new treatments: tyrosine kinase inhibitors. He says: “Combined with immunotherapy, they are proving to be very effective, leading to the recovery of a significant proportion of these patients who previously were not cured.” Therapeutic trials continue today in connection with the Genome Integrity, Immune Response and Cancers unit (IGC - Université Paris-Saclay, Gustave Roussy, CNRS). He commentes: “It's amazing to see former patients coming back five to ten years later with a bottle of champagne to share. Forty years ago, they wouldn't have survived.”

Martin Schlumberger has spent his entire career at Gustave Roussy. “It's a unique place in France. Modelled on the American model that has made medical science successful there, the symbiosis between research and clinical medicine is perfect,” he says. He describes his links with Université Paris-Saclay as “unfailing” and the combination of so much intellectual wealth as “formidable”. His collaboration with the French Alternative Energies and Atomic Energy Commission (CEA) has been in place for a long time. Less well known, the great place occupied by the human sciences in his research is at the origin of his medical-economic work, in collaboration with Isabelle Borget of the Faculty of Pharmacy, Université Paris-Saclay. “In addition to survival and relapse rate, which are two key criteria for measuring the effectiveness of treatment protocols administered to thyroid cancer patients, we are also conducting a medical-economic analysis,” he says. In other words, the cost to society for a patient's survival one, two, or ten years and the quality of life of patients whose life expectancy is extended. This work is carried out in close collaboration with the patient association “Vivre sans thyroïde” (Living without thyroid).

Care, research and passing on knowledge

Marked by the publication of his first article in the New England Journal of Medicine in 1998, oncologist Martin Schlumberger has received numerous awards and has an impressive number of publications to his credit. He is one of the most cited researchers in the world. He commented: “You can joke about anything, but the goal of a researcher is to advance knowledge. Advances in knowledge are recognized by the number and quality of publications and their citations.” He has directed Université Paris-Saclay Doctoral School of Oncology and the Gustave Roussy School of Cancer Sciences, which he started. He says: “It was created about 15 years ago to structure the oncology teaching between the Institute, Bicêtre Hospital (university hospital centre) and the Faculty of Medicine. Knowledge is passed on in a number of ways. It is done through research, joint practice or mentoring, and writing and analysis of articles.”

Oncology is still a very difficult field for the younger generation of doctors, because despite considerable progress, patients are still dying of cancer. Martin Schlumberger concludes: “We need light, intellectual and emotional compensation. In our business, this is research and innovation.”