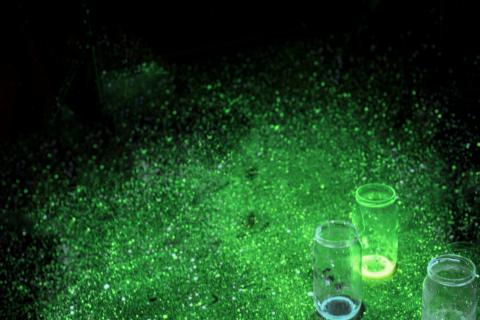 Rémi Métivier: The beauty of molecules

Rémi Métivier is a researcher at the Supramolecular and Macromolecular Photophysics and Photochemistry Laboratory (PPSM – Univ. Paris-Saclay, ENS Paris-Saclay, CNRS). He uses the understanding of fundamental physical phenomena to create and study synthetic molecules with unique and innovative properties which are then used in many applications, including optical systems and smart materials.

Rémi Métivier has always been fascinated by molecules and their interaction with light - a field in the area where chemistry and physics meet. “These fundamental processes have been studied for centuries, but some of them still aren’t understood. I study molecules with photochromic and fluorescent properties. This combination is particularly interesting for current and potential applications, even though I’m not necessarily a specialist in bringing these molecules to market,” explains the researcher.

Rémi Métivier’s specialism is ‘photochromism’, i.e. the capacity of some molecules to change colour under the effect of light. Possible applications include optical systems (display and storage of information, imaging, etc.), energy systems (generation and storage of solar energy) and ‘smart materials’, such as glazing which is capable of spontaneously darkening in the light. Together with his colleague Clémence Allain, the researcher is also studying the phenomenon of ‘mechanofluorochromism’, which is specific to fluorescent molecules whose behaviour is modified by mechanical stimulation (pressure, friction). There are also many potential uses as coatings, force sensors and damage markers in the construction, security and packaging sectors.

The researcher uses high-tech instruments, such as spectrometers and pulse lasers, etc. to manufacture and characterise synthetic molecules. The PPSM laboratory is involved in all aspects, from synthesis to optical characterisation, and has fostered numerous collaborations in Europe and Asia, and with Japan in particular. “We’ve been working for many years with universities in Japan, including the Nara Institute of Science and Technology in Ikoma, the Universities of Osaka, Kyoto and Kumamoto, and Aoyama Gakuin University in Tokyo, to name but a few.” The associated international laboratory LIA (a laboratory ‘without borders’) was born out of these partnerships and Rémi Métivier has been its local manager since 2018.

France occupies a leading position in the international photochromic community, alongside Japan, China, the United States, Germany and Russia. However, since ENS Paris-Saclay became a part of the Saclay plateau a year and a half ago, the researcher has been looking forward to increasing the opportunities for local partnerships. “Genuine proximity is very important. In just 15 minutes, we can spontaneously schedule meetings at the CEA or with our synthetic chemist colleagues in the University’s various laboratories."

When faced with incomprehensible or surprising results in experiments, Rémi Métivier has always wanted to understand them first and explain them later. At first, he thought he would become a teacher. He got his taste for chemistry and physics from his teachers on the 2-year preparatory course for the competitive science exam in Nantes. “I didn’t know which subject to go for, but I’ve ended up in a field which straddles them both!” He studied chemistry at ParisTech (1998-2000), then began his PhD at the PPSM laboratory. “Bernard Valeur and Isabelle Leray gave me a taste for research in photochemistry. Since then, I’ve remained fascinated by the beauty of the fluorescent and photochromic molecules which we synthesise and observe glowing under the light of our instruments.” After his thesis defence in 2003, the researcher left to spend two years in Germany as a postdoctoral researcher in order to further his knowledge of fluorescence microscopy from the grand scale to the single molecule scale. “We were looking to understand how the molecules worked on an individual basis. We saw them light up one by one, then go out. It was completely magical!” On his return to France, Rémi Métivier was recruited by the PPSM and then promoted to research director in 2018.

The young researcher's first results were promising from the outset. “We were able to show that when fluorescent molecules are combined with photochromic molecules, they manage to communicate with each other. The photochromic molecules are even able to influence hundreds of fluorescent molecules. It’s this amplification effect of the fluorescence signal which makes it possible to envisage applications in the fields mentioned above.” The scientific community saw sufficient innovative opportunities in his work for them to want to reward Rémi Métivier, and the researcher received a bronze medal from the CNRS in 2011. “Some of our first publications in the field made an impression due to their originality. In fact, I wasn’t expecting this award at all as these results to my mind were the result of a collective effort."

The award opened many doors for the researcher. He subsequently obtained funding for a project from the French National Research Agency (ANR) and joined the National Scientific Research Committee at the CNRS to assess and recruit researchers. Gradually, he became increasingly involved in the life of the scientific community. In 2014, he obtained his ‘Habilitation à diriger des recherches’ (authorisation to direct the research of others – a post-doctoral degree) and became manager of the ‘Photocommutable molecular and hybrid nanosystems’ group within the PPSM laboratory. A year later, he joined the Paris-Saclay Chemistry-Physics Federation steering committee. Together with his colleague Fabien Miomandre, he set up the Photo-electrostimulation research group, of which he became Deputy Director in 2018. Over the next two years, he became president of the photochemistry subdivision of the ‘Société chimique de France’ (French chemical society) and then joined the steering committee at LabEx NanoSaclay.

Rémi Métivier enjoys wearing his many ‘hats’. “On the one hand, I enjoy working on a daily basis with my fellow researchers and passing on my knowledge to my students. On the other, I find it exciting to be involved in facilitating communities of researchers in photochemistry or related fields.” Since 2021, he has been a member of the Université Paris-Saclay Chemistry Graduate School. This has given him the opportunity to continue to deliver various messages to the younger generation - in particular that being a researcher is “great”! “We do what we love. We’re also free to choose our own work schedule, research topics and organisation while enjoying constant interaction with our colleagues and students. Science concerns everyone. It’s not just for specialists. In a fast-moving world where we have to make rapid technological choices, we all need a good dose of scientific literacy. Knowledge is a good thing for everyone,” says Rémi Métivier in conclusion.