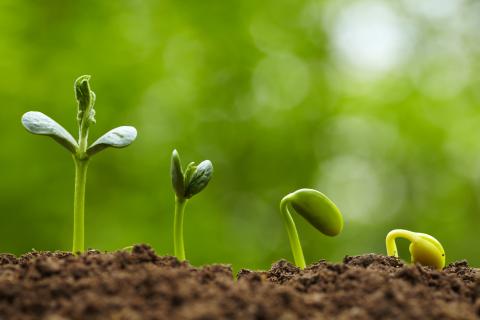 The BOSS (Booster Of Seeds and Seedlings) project is the result of research carried out at the Jean-Pierre Bourgin Institute (Université Paris-Saclay, INRAE, AgroParisTech).  It uses seed priming technology to optimise seed germination and to help young seedlings get established without the use of pesticides. Thanks to the support of SATT Paris-Saclay and the keen interest shown in industrial circles, the start-up Seed In Tech (SIT), newly created, already has great aspirations.

The BOSS project, led by Loïc Rajjou, a professor at AgroParisTech and a researcher at the Jean-Pierre Bourgin Institute (Université Paris-Saclay, INRAE, AgroParisTech) in Versailles, is in line with the European agricultural policy. This encourages the diversification of crops and practices in order to reduce the environmental impact of production and to promote low-input, low-carbon agriculture, such as organic farming. While key players in the seed and seedling sector, who are subject to numerous constraints, still all too often resort to post-harvest seed treatments by coating seeds with synthetic phytopharmaceutical products (mainly fungicides and insecticides), BOSS is offering something genuinely different. “We propose to replace these practices with seeds with a high germination potential and resistance to environmental stresses,” says Loïc Rajjou.

The technology of priming

BOSS will be able to be used for any type of seed to be sown and is compatible with the standards currently in force in organic farming. It involves guaranteeing rapid germination in open fields or in greenhouses which result in young plants resistant to biotic stresses (i.e. pathogen risks), climate stresses and economic strain. After fifteen years of research in the field of seed biology and the metabolic and cellular mechanisms which govern their potential for germination and growth, Loïc Rajjou could accurately identify the needs of young seedlings. “This increased understanding has led me to develop a solution to improve vigour and germination speed.” Thanks to the seed priming technology, he has succeeded (together with his team) in identifying and boosting molecules already present in the seed (not synthetic molecules) to stimulate the growth potential and stress resistance of embryos and young seedlings. These treatments consist of the addition of bio-based molecules such as nutrients. “Everything is metabolised by the embryo’s cells. It’s a bit like a treatment to boost your health when you are weak or wish to prevent the onset of illness.”

The support of Université Paris-Saclay

Loïc Rajjou’s research work used the plant Arabidopsis thaliana as a model, which plays no role in agricultural production. “It’s a bit like the plant version of the laboratory rat.” In 2015/2016, pre-maturation funding from Poc in labs from Université Paris-Saclay meant that he could transfer this work to cultivated plants such as tomatoes and lettuces. Thanks to the results obtained, he won a development programme which was funded and supported by SATT Paris-Saclay. This provided him with the opportunity to develop and refine the treatment formulas, and to scale up the technology to a pre-production level. “For tomatoes, we were able to treat two kilos of seeds, as opposed to a few grams in the laboratory. That is equivalent to 600,000 seeds/plants.” He took on two young scientists - Frédéric Chauffour for the scientific strategy and Omaé Pozza for the methodological development. Hugues Dumas, a former product manager at a leading seed company, joined the team in 2020 and brought with him his expertise at placing products on the market. Loïc Rajjou took on the role of scientific consultant.

Certain soil-borne diseases, caused by fungi or bacteria, can sometimes attack crops and cause up to 70% yield losses due to seedling blight (a disease transmitted to the seed from the parent plant or the soil). This mainly affects vegetable crops, such as lettuce, tomatoes, aubergines, cucumbers and flowers, but also field crops such as rape and maize. To avoid this biotic stress, the smart priming approach developed by BOSS offers increased leeway for sowing dates thanks to the fact that the plant's cycle is not synchronised with that of pests and diseases. This treatment, which combines biostimulation and biocontrol, also promotes the vigorous growth of young shoots. This generates defence mechanisms against disease while the crop establishes itself.

Speed and uniformity of germination to work around global warming

Priming also compensates for any effects of rapid climate change to which plants have not yet adapted. For example, lettuce germinates well during rather cool spring temperatures, i.e. in March or April. “For some varieties, farmers and lettuce growers want to sow as late as possible to have a longer production period on into the end of the summer.” However, global warming means that temperatures are rising in May and June. Once a certain threshold has been reached, thermo-dormancy sets in and the seeds lose their ability to germinate. The smart priming treatment leads to the restoration of this germination potential and germination rates of over 95% above 30°C can even be achieved.

Once the treatment has taken place, the seeds are dried in a controlled way, making it possible to store them for at least eighteen months. “Whereas with the traditional priming treatments currently used in the industry, seeds must be sown within six months,” points out Loïc Rajjou. In terms of logistics, this is of great benefit to the seed market which is international in scale and operates on a just-in-time basis. In case of fluctuating demand, seed companies and distributors can postpone the marketing of lots for a year or to other markets.

The creation of the Seed In Tech (SIT) start-up

This technology is of interest to several international seed companies and is in the process of being transferred into the industrial sphere via the newly created start-up Seed In Tech. The team has also filed a patent on the formulas, i.e. the ingredients and active materials of biological origin used in the smart priming treatment. It is adopting a trade secret strategy for the application process as it uses molecules found directly in the seed. It is therefore impossible to trace the copies and to justify them legally.

Seed In Tech is offering key players in the sector (seed companies, producers, etc.) a range of seed treatment services, as well as customised treatment developments for particular varieties or species. “We plan to co-develop with seed companies to industrialise the treatment in their factories.”

Seed In Tech already has a roadmap for the next five years. The start-up is planning to recruit approximately eight employees to take on commercial, scientific and technical projects. The team is in discussion with some fifteen seed companies based in Europe, whose production requirements cover the whole world. “We’re making our own contribution to the creation of a healthier form of agriculture which is adapted to future food needs using the dual approach of producing better, but with less environmental pollution,” says Loïc Rajjou in conclusion.