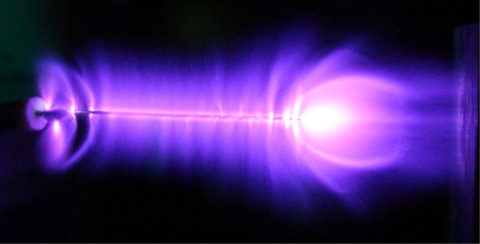 The future start-up SPARK has developed innovative technology for reducing the CO2 emissions which result from conventional hydrogen production. Its unique process should be of interest to businesses looking to reduce their carbon footprint and production costs, and future operators of hydrogen filling stations both in France and abroad.

The SPARK project (named after the nanosecond plasma system it uses) is the result of Erwan Pannier’s PhD. A former PhD student at the “Énergétique moléculaire et macroscopique, combustion” (Molecular and macroscopic energetics, combustion) laboratory (EM2C - Université Paris-Saclay, CentraleSupélec, CNRS), he defended his thesis in 2019 after having studied at Centrale Paris, where he completed a specialist course in energy. The aim of SPARK is to offer a solution for transforming greenhouse gases into hydrogen. This project is part of the ecological transition. Today, several manufacturers in France are using hydrogen as an ingredient in their processes because of its molecular properties. In 95% of cases, it is produced from fossil gases using processes which emit high levels of greenhouse gases, and its generation is responsible for 3% of national and global emissions. The young researcher is interested in ways to decarbonise the production of hydrogen. Electrolysis production, which is increasingly used, also consumes a lot of electricity. “If electrolysis was used for all the hydrogen needed for 2030, it would take about seven additional nuclear power plant units to supply it in France alone.’

The purpose of SPARK is to design a decarbonised and efficient intermediate solution. It consists of methane pyrolysis using cold plasma to extract hydrogen without releasing greenhouse gases. This involves using very short electrical pulses to break down the methane molecules and remove the carbon in solid form. As a result, there are no CO2 emissions. This solution also consumes less electricity. “Thanks to the pyrolysis process using cold plasma, we use three to five times less energy than an electrolyser which extracts hydrogen from water.” Furthermore, while there are other technologies for producing decarbonised hydrogen by pyrolysis, some use higher temperature plasmas which place thermal constraints on the efficiency of the process and the reactor materials. “With cold plasmas, we can remove all these difficulties as the temperature of the electric arcs is controlled.”

SPARK intends to make it possible to produce hydrogen in medium volumes and flows (in the order of 200 to 2,000 kg per day) directly at the point of consumption. This decentralised production disrupts the traditional merchant hydrogen distribution model which produces in a large, centralised way and then delivers by road to small and medium-sized consumers. However, hydrogen is a molecule which is difficult to transport - particularly because of its small size and very low density - and this method of distribution entails significant costs amounting to at least 70% of the final price. SPARK offers the possibility of overcoming this constraint and its environmental cost thanks to on-site and on-demand production. This innovative aspect is all the more important as the use of hydrogen as an energy carrier promises to be more decentralised in the future.

Plenty of support and assistance

This innovative solution emerged thanks to numerous support programmes available at Université Paris-Saclay. In 2019, Erwan Pannier took part in the “Doctor’Preneuriales” course, which trains PhD students in entrepreneurship specific to deeptech, i.e. projects which come directly from laboratories. “The world of research and entrepreneurship have much in common, but you have to immerse yourself in both to be able to connect them together.” The young doctor was introduced to entrepreneurship via “hackathon” type workshops and in this way discovered the University’s entire entrepreneurial ecosystem. Once his project was ready, he turned to SATT Paris-Saclay which granted him assistance and financial support within the framework of its “Jeune docteur” (young doctor) pre-maturation project.

He then carried out a technical proof of concept of his project and filed a patent concerning the means of stabilising the pulsed nanosecond plasma discharges in order to make their industrial application possible. “Without all this support, SPARK would now just be a thesis manuscript left on a shelf.” At the start of 2020, he won the “i-PhD de Bpifrance” innovation competition which is aimed at young doctors who want to set up a deeptech start-up. He then completed their “DeepTech Founders” support programme, during which he met Thérèse Dettwiller, a young graduate entrepreneur from HEC. She joined SPARK to accelerate its development and spearhead the future start-up. As for Erwan Pannier, he wants to concentrate on developing “impact” technology with an environmental focus. At the end of 2020, the project was awarded funding as a result of the call for maturation projects by SATT Paris-Saclay. This meant an engineer with expertise in the design of reactors and plasma generators could be recruited to accelerate the development of the innovation.

The next step on SPARK's roadmap is to optimise the reactor (which is at the core of the technology) for methane pyrolysis by July 2022. Subsequently, the start-up plans to develop its first industrial demonstrator, i.e. an assembly of modular units in a container capable of producing on site between 25 and 100 normal cubic metres (Nm3/h) of hydrogen per hour to industrial standards. With this in mind, the start-up is looking for industrial partners to co-develop the project, benefit from expertise as regards the process and host the demonstrator so that it can be tested in real conditions. SPARK initially plans to deploy the solution for industrial use before addressing the issue of mobility. “Imagine a network of hydrogen filling stations for trucks and captive fleets, as well as in train stations and other transport terminals!” The creation of the start-up is planned for mid-2021. “Today, all industrialists are on the lookout for emerging technologies for the production of hydrogen, so our goals reach far beyond France. We’ve already expanded our patent filings to cover the market on an international scale.”