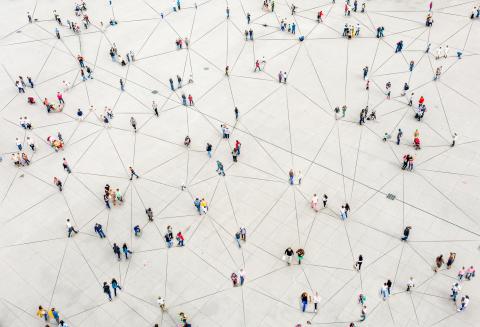 A behavioural study of social connections

Economic life is organised around networks of relationships. We create connections with our peers, they in turn themselves form connections and this creates a complex web, the dynamics and implications of which are still poorly understood. As part of the French National Research Agency (ANR) LinkLab project, Margherita Comola, a professor of economics at the Networks, Innovation, Territories and Globalisation Laboratory (RITM – Université Paris Saclay), is exploring from a behavioural point of view the way in which individuals connect with others in decentralised and increasingly virtual markets.

Economists only started becoming interested in social networks in the 1990s. This was something which had already been studied by sociologists and psychologists for a considerable amount of time. Yet personal and professional relationships at an individual level dominate the economic world, and social interactions structure social, digital and financial networks.

Even today, little is known about behavioural drivers and how one individual decides to form a bond with another. However, with the advent of digital networks (digital social platforms and online marketplaces), these interactions have intensified and the diffusion of information and opinions has accelerated.

The LinkLab project was born out of the richness of these digital networks, both in terms of their complexity and the amount of data they are able to provide. As part of this project, which has just received funding from the National Research Agency (NRA), Margherita Comola, a professor in economics at the Networks, Innovation, Territories and Globalisation Laboratory (RITM – Université Paris Saclay) as well as a affiliate professor at the Paris School of Economics, is looking to address the problems of negotiation in virtual markets, competition for online influence and the role of resource inequalities in this digital world.

The complexity of networks

In microeconomics, a large number of studies are based on game theory which models strategic interactions between ‘players’. When this theory is applied to social networks, the strategy for forming links between individuals and the way in which the overall network in place affects individual behaviour is the object of study. One challenge is understanding the role of externalities, that is, the influence of ‘distant’ players that are indirectly connected through the social network structure. “We don't so much want to understand why we’re friends, but what is the impact of a friend of a friend, or of a friend two steps further away. It’s here that the difficulties in evaluating externalities lie,” explains Margherita Comola.

With this in mind, she bases her research on the comparison of economic models with observational data. In the past, she has mainly worked with data from developing countries, which has permitted to investigate closed social networks at the level of a village. In recent years, the researcher has also focused on the development of laboratory experiments. These experiments require rigorous methodology and extensive facilities but provide detailed information on the interactions between individuals in a controlled environment. In practice, participants meet in a laboratory equipped for real-time digital group interaction. They experience a form of collective play where the choice is strategic (a goal to achieve within the group, for example) and the reward is monetary. The researcher records the interactions between participants during successive rounds of play. This approach is an excellent tool for observing the behavioural patterns of interacting individuals and for the empirical testing of theoretical models.

A project in three parts

The LinkLab project, which has just started and will last four years, aims to apply these same methods to the study of digital social interactions in the broadest sense, including online marketplaces and social networks (in the usual sense of the term). As opposed to so-called centralised markets where matching is carried out by a central platform (e.g. the allocation of new doctors to hospitals and students to secondary schools), the users of digital platforms are free to form connections and groups without centralised allocation.

The first part of the project will analyse users' negotiations on eBay-type shopping platforms. Here, users form bilateral connections (seller-buyer) to conclude transactions. Sellers place bids, but have little information about the potential buyers and their assessment of the goods on offer. The digital space for bargaining is still limited. However, such platforms are bound to evolve in this direction and further increase exchanges, which will eventually lead to total freedom of negotiation.

Another marketplace with a strong presence online today is that of information and opinion or, in other words, influence (to use current terminology) and is the subject of the second part. Digital platforms such as Facebook and Twitter have generated a spectacular flow of information in recent years, both in terms of volume and speed. The experiments designed by Margherita Comola involve following the competition for information between two opponents - and it is possible to see an analogy here with the political opposition between the Republicans and Democrats. “Each individual has a certain strategy for disseminating their opinion and targeting other individuals. This depends on their preference to target those who share their same opinion or not. And public opinion as a whole changes accordingly,” explains the researcher. This part of the project is crucial for understanding the spread of fake news, for example.

The third and final part of the LinkLab project will address the issue of resource inequality in the context of digital interactions. Users deploy varying degrees of engagement on virtual platforms such as forums, with some sharing more or less information, or develop new tools. Margherita Comola wishes to understand how these disparities in contribution arise from inequalities in resources, both in terms of finance and time available. To this end, she has designed a laboratory experiment which draws on the literature on public goods games. “Each participant is allocated a certain endowment and contributes to a common pot with an amount of their choice, which remains private. This common pot is then multiplied by a factor to be redistributed equally within the group,” explains the researcher. The study of these resource-giving behaviours in networks is necessary to understand how to achieve an indirect benefit by changing the distribution of resources.

Thanks to her technical expertise, Margherita Comola can bring an experimental approach to the project with the aim of using controlled environments which the researcher can then manipulate as she wishes. By their very nature, digital networks provide access to an unprecedented amount of observational data, making them an ideal subject to study. In the end, understanding how social connections form from a behavioural point of view will start to unravel the web of these networks, either digital or not, which contribute so much to shaping our professional and personal lives, and, in more general terms, economic life.