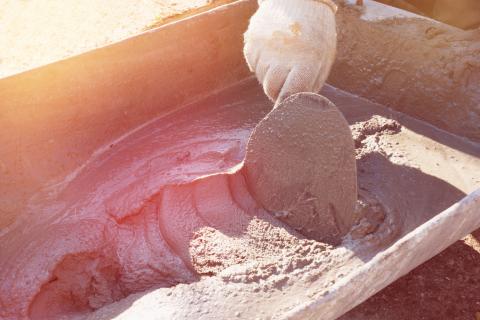 Understanding the origin of the remarkable cohesion and structural properties of cement is the starting point for the research being carried out by a team from the Theoretical Physics and Statistical Models Laboratory (LPTMS – Univ. Paris Saclay, CNRS). Together with colleagues from the Institute for Soft Matter Synthesis and Metrology (Georgetown University) and other universities, scientists have used digital simulations to demonstrate that the cohesion of cement results from two phenomena taking place at the nanometric scale. These are the weakening of the electric field of water as its molecules become entrapped by the calcium ions in cement, and the increase of the electrostatic coupling between these two actors.

“The incredible thing about cement is that it is one of the most widely used man-made materials in the world – billions of tons of it are produced every year, emitting a huge amount of CO2 into the atmosphere – and yet we don't really know how it works! ,” points out Ivan Palaia, a recent graduated PhD from LPTMS. This enigma still remains a major obstacle today to the progress of the science and technology surrounding cement. “It’s a very complex material in which many phenomena take place at different levels. These include chemical reactions, as well as physical processes involving the products of these reactions,” explains the young researcher, whose thesis (carried out under the supervision of Emmanuel Trizac) focused on understanding these phenomena.

Cement is a powdered material made of calcium silicates. When dissolved in water, it creates a paste which contains the products of its precipitation with water, in particular hydrated calcio-silicate or C-S-H. Its gradual setting results in a material which becomes increasingly hard, resulting in concrete. “It’s generally assumed that concrete dries and the water evaporates, but the opposite is true. The cement hardens precisely because the water is there,” explains Ivan Palaia. “In collaboration with colleagues from the Physics Department at the Institute for Soft Matter Synthesis and Metrology, our work has focused on the physical phenomena which take place at the nanoscopic scale and are responsible for the cohesion of cement. We were particularly interested in the role played by water and its molecules.”

Until now, the model put forward to explain this force of attraction was that of a strong electrostatic coupling or ionic correlation. This phenomenon results from the accumulation of solvated calcium ions between the platelets. When confined in this way, the ions are arranged in staggered rows along the two surfaces “Just like a zip,” points out Ivan Palaia. “However, simulations were carried out and it was found that the force with which two platelets attract each other is, in order of magnitude, a hundred times greater than that predicted by the theory of ionic correlations,” adds the young researcher. The team then decided to look more closely at the fate of the water once the staggered structure was in place.

‘Captive’ water deprived of its role

Water is a fluid whose molecules are polar. They are electric dipoles which generally act as a screen, i.e. they reduce the electrostatic force with which two charged objects attract or repel each other. For this screening (or attenuation) to take place, the water molecules must be free to move between the objects. However, in cement they solvate calcium ions and become trapped in the solvation shells around these ions. This phenomenon is known as ‘locked water’.

“By taking into consideration these two aspects – the correlation of the ions and the fact that the electrostatic force is no longer shielded by the water molecules – we obtained a force of attraction one hundred times greater than with the previous models,” explains Ivan Palaia.

A reaction facilitated by the development of the electric charge

There is a hypothesis which adds to these explanations. It concerns the development of the platelets’ load, which become more and more negative as the cement hydrates. “In the early stages of hydration, charges are low and the interaction between platelets is quite weak. The effects of ionic correlation and water molecule scavenging are secondary,” explains Ivan Palaia. “But as the hydration reaction proceeds, the charges increase and the electrostatic correlation becomes increasingly stronger, attracting the platelets together.”

Many other physicochemical processes complete these phenomena, which together ensure the cohesion of the cement. These important advances in the understanding of electrostatic mechanisms are already opening up new avenues of thought on how to improve the cement manufacturing process, in particular in reducing greenhouse gas emissions while preserving the material's great strength.