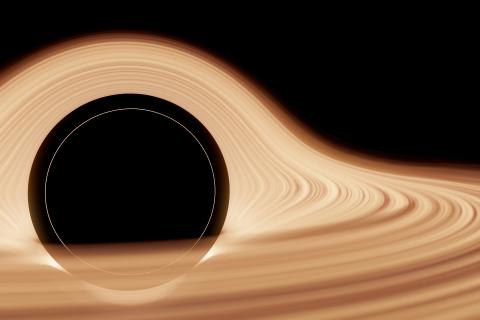 The emergence of gravity and black holes

Tension between the theory of relativity and quantum mechanics has long been a source of defeat for physicists. Since 2016, Monica Guică, from the Institute of Theoretical Physics (IPhT – Université Paris-Saclay, CEA, CNRS), has been developing new theoretical tools within the framework of the Emergent-BH project, which has been awarded an ERC Starting Grant. Her theories bring the community closer to a more detailed description of the emergence of gravity in our spacetime by manipulating theoretical spaces and by looking at black hole event horizons.

Physics is torn between, on the one hand, the theory of relativity, gravity, the physics of the infinitely large, and on the other hand, quantum mechanics, the physics of the infinitely small, of particles, and their interactions. Research into a unifying theory that can describe gravitational interaction on any scale, which is known as quantum gravity, is one of the most difficult quests in physics. Monica Guică, a researcher from the Institute of Theoretical Physics (IPhT – Université Paris-Saclay, CEA, CNRS), has been exploring this question within the framework of the Emergent spacetime and maximally spinning black holes project. Her idea is to study the quantum origin of gravity by using general black holes, with the aim of expanding on existing theories to a spacetime that is more like ours.

Black holes are a fascinating aspect of the universe for the collective imagination. They are also a special research focus for theoretical physicists. Although their existence was contemplated thanks to Isaac Newton’s law of universal gravitation (1687), they were formally predicted by Albert Einstein’s work about the theory of general relativity in the early 20th century (1915).

They pose a significant theoretical problem. When in equilibrium, they are uniform, smooth and without disorder. Yet, disorder is synonymous with what physicists call entropy, which is information. “If I throw a coffee cup, an object with many degrees of freedom, into a black hole, only its mass will change. We lose any information about what has fallen into it, and this poses a thermodynamic problem,” explains Monica Guică. During a transformation, entropy can only increase, which is what the second law of thermodynamics suggests: “the entropy of an isolated system can never decrease”.

In the 1970s, the Israeli-Mexican physicist Jacob Bekenstein, connected an entropy to black holes in order to restablish this second law of thermodynamics. The work by British theoretical physicist Stephen Hawking, alongside the Australian Brandon Carter and the American James M. Bardeen, later refined the composition of this entropy. It depends both on Newton’s and Planck’s constants, which stem, respectively, from gravity and quantum mechanics. This puts black holes at the centre of the search for a unifying theory.

Unlike a usual system, this entropy is proportional to the surface, and not the volume, of the black hole. This has led physicists, and in particular, the Dutch physicist Gerard ’t Hooft, to consider gravity as holographic, in that all information contained in a black hold is completely coded on its surface. It is similar to watching a 3D movie. The glasses will transform a deformed, two-dimensional image – a surface – into a three-dimensional visual experience – the volume. This emergent dimension in space is what could be at the origin of quantum gravity.

The playground of virtual spacetimes

String theory, where elementary particles are no longer defined as points but rather strings, confirms the idea of holography. This theory provides many examples of spacetimes with variable geometries and dimensions that physicists can manipulate as they like. It provides the first representation of the emergence of quantum gravity in a space called ‘anti de Sitter’ (AdS) based on another space, with one dimension less and governed by a non-gravitational theory, a Conformal Field Theory (CFT). In this case, the CFT is the two-dimensional image and the AdS is the volume in which the 3D image is found, like a hologram. The shift from one to another is complex, but is possible thanks to various transformation operations that are provided by a type of dictionary between physical observables. This is the AdS/CFT correspondence.

The initial question remains, however, because the AdS space, although practical in theory, does not represent our spacetime. This is where Monica Guică comes in. She has put forward a theoretical framework which is closer to our spacetime, all the while using existing transformation tools. The challenge was in finding the right surface theory that would allow gravity to emerge in volume.

The ice has been broken

The researcher focused her work on black hole event horizons, where escape velocity, which is necessary for an object to escape gravitational force, reaches the speed of light. In this place, physics becomes simpler. “For any black hole, string theory or otherwise, it is at this point that the structure of spacetime is universal,” she says. “We like this because precisely, we want to establish a universal theory.”

At the event horizon, spacetime becomes an AdS deformation. Monica Guică was inspired by the AdS/CFT correspondence to develop a similar correspondence there, between the deformed AdS and a non-gravitational and lower dimension field theory that is equivalent to CFT, and to obtain new holographic correspondence between volume and surface. In order to develop this new theoretical framework, she followed a rather unorthodox calculation pathway, starting from the CFT within the existing AdS/CFT correspondence. This is a counter-intuitive approach in physics because it is usually by starting with physics at a microscopic scale, that of molecules or very small objects, and with certain effects, that we obtain and understand macroscopic behaviour. “Large-scale physics forgets what happened to small-scale physics”, summarises Monica Guică.

Thanks to this reverse approach, the researcher has been able to formalise a certain number of tools and transformations between all these spaces. Studying the emergence of gravity in these general black holes is a little simpler today. “For nearly 25 years, research was focused on the AdS/CFT correspondence, or other very specific examples, says the researcher, but now, we are shifting towards the general and the concrete, knowing that this correspondence is the best understanding of quantum gravity that we have. The ice has been broken but there is still a lot to be done.”