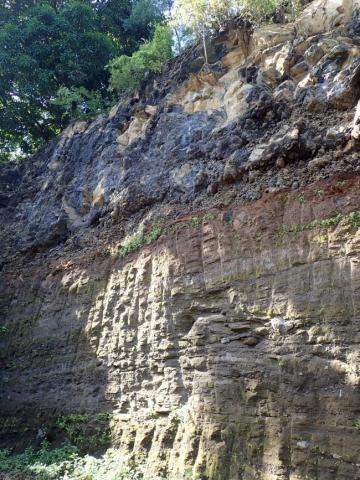 Going back in time in the volcanic Comoros archipelago

It is not only in the Canary Islands where volcanic activity is the focus of attention. Scientists have been carefully monitoring a submarine volcano off the coast of Mayotte in the Comoros archipelago (Indian Ocean) since 2018. The seismic activity of the archipelago and its surroundings has led to several investigations, including the dating of rocks. A team of researchers from the Paris-Saclay Geoscience laboratory (GEOPS – Université Paris-Saclay, CNRS), from the University of Reunion Island and other international laboratories have been mapping volcanic activity on the island of Anjouan, located in the centre of the archipelago. Their work has shown the existence of recent volcanic activity on the island and of volcanism resulting from tectonics throughout the Comoros.

The dating of rocks is a rare but essential measurement in volcanology, as explains Xavier Quidelleur, a university lecturer and researcher at the GEOPS laboratory and a specialist in the chronology of volcanic processes. “Dating the rocks makes it possible to reconstruct the history of a volcano in the past, to know its phases of activity, to better understand how it functioned and to eventually better understand its reactivations.”

Dating is based on radioactivity resulting from the sudden decay of certain elements contained in the rocks into radiogenic elements. The best known, carbon-14 (14C), gives an accurate age within the last 50,000 years, but can only be used on rocks containing carbon. This is rarely the case for volcanic rocks. “It’s a method of choice for charred wood deposits in some explosive volcanic deposits, but not for lava flows as the wood is completely burnt away,” points out Xavier Quidelleur, who prefers the Cassignol-Gillot technique of potassium-argon (K-Ar) dating. This method makes it possible to date volcanic rocks by measuring their concentrations of radiogenic argon-40 (40Ar) resulting from the decay of potassium-40 (40K). This assumes that potassium was present in the rocks when they were formed, that they did not contain argon and that all the argon from the decay of potassium was in fact trapped.

The measurement is fragile because “Potassium is a very mobile element in that if the rock remains in the open air and is subject to changes in weather and temperature, it can be released over time and be removed from the rock. Any measurements would then be meaningless,” points out Xavier Quidelleur.

The origin of volcanic activity in the Comoros archipelago has not really been studied in the past, and little is still known about it today. Several theories have been put forward, including that of a hot spot, i.e. the creation of a chain of volcanic islands linked to the movement of a tectonic plate over a hot spot. “This theory has been put forward because Grande Comore is home to an active volcano with a very marked topography,” points out Xavier Quidelleur. “Whereas, at the other end of the archipelago, Mayotte has very significant erosion and a coral reef, which is typical of ancient volcanic activity.”

Following some worrying seismic shocks felt by the population of Mauritius in 2018, oceanographic surveys have uncovered a new, active, submarine volcano east of Mayotte. As a result, the volcanic activity at each end of the archipelago contradicts the theory of a hot spot associated with ‘linear’ ageing.

Another theory is that of 'fissural' volcanism, associated with the regional tectonics of the East African Rift. Fractures linked to plate movement would likely result in the introduction and storage of magma in these areas. “This would explain why we have volcanic activity which does not increase in age as we move away from the hot spot but which can be active at any time on each of the islands of the archipelago,” says Xavier Quidelleur.

Research in the field

To understand the relationship between volcanic activity and geodynamics, the team is seeking to date the most recent volcanic episodes on the central island of Anjouan, where no modern studies have yet been conducted. These episodes can usually be seen in features in the landscape, for example lava flows with little or no soil cover and flowing through valleys.

The team has taken various samples from lava flows, as well as a charcoal sample for radio carbon dating. “In tropical areas, vegetation is very lush and it’s usually hard to get access to samples. Open sites such as beaches, riverbanks or roadsides are best,” explains Xavier Quidelleur. This approach also allows finding rocks which have been protected from any exchange of elements with the outside world.

The preparation of the rocks - a crucial step

The 150 kg of rocks brought back from Anjouan first go through a rigorous week-long preparation stage. “This is different from most previous studies where people made measurements on ‘total rock’. They crushed it and analysed it completely, without sorting the minerals,’ explains Xavier Quidelleur.

Volcanic rocks are likely to contain phenocrysts. These minerals are visible to the naked eye. They crystallised in the magma chamber at depth and may contain excess argon which does not originate from the radioactive decay of 40K since the eruption. This can distort the K-Ar dating measurements. “This problem is overcome by selecting only the parts containing microliths, i.e. only the minerals which crystallised during the eruption. That’s the key to success.” Two kilograms of crushed, sifted and filtered rock only provide about fifteen grams of material which can be used and analysed by the spectrometer.

A volcano sleeping with one eye open

In the end, the thirteen lava flows sampled are less than one million years old, five of which are estimated to be less than 60,000 years old. Charcoal dated using 14C gave an age of about 9,300 years. These discoveries show that there has been recent volcanic activity on Anjouan and suggest that the system is not extinct. “This doesn’t mean that this system will wake up in a week - we don't want to panic the population,” says Xavier Quidelleur as a note of caution. “But, geologically speaking, it’s certain that volcanic activity will return.”

Furthermore, the age distribution suggests that the island's volcanic activity over the last million years occurred intermittently and in pulses, separated by rest intervals of about 200,000 years. Such a distribution supports the theory of fault activity linked to tectonics.

“This is only a theory as it may also be due to the fact that not enough samples were taken. However, if this does correspond to tectonic phases, we have to check this across the whole archipelago. This is why we’re going to continue our work on the neighbouring island of Mohéli and on underwater structures,” concludes the lecturer.