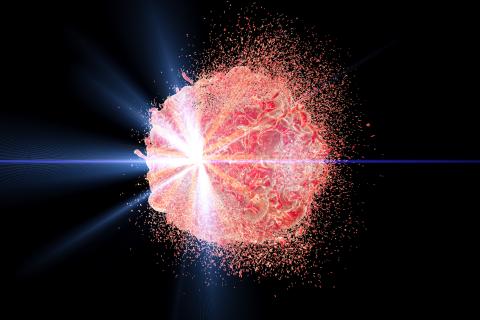 The LySAIRI project, led by Éric Deutsch at the Molecular Radiotherapy and Novel Therapeutics laboratory (RaMo-IT – Univ. Paris-Saclay, Gustave Roussy and Inserm) and the winner of the Call for Proposals ‘Recherche Hospitalo-Universitaire’ (University Hospital Research) in Health for 2021, aims to reduce the harmful effects of radiotherapy on the immune system. This transdisciplinary research uses artificial intelligence to improve how treatments are targeted for neck and head tumours.

Radiotherapy has been used for many years now to treat cancer. It has a direct effect on cancer cells by causing their destruction. Moreover, radiotherapy has a dual effect on immunity; it both stimulates the immune system but can also weaken it.

“We’ve known about the stimulating effects of radiotherapy on the immune system for more than 10 years now,” explains Éric Deutsch, Professor in Oncology and Radiotherapy at Université Paris-Saclay and head of the Molecular Radiotherapy and Novel Therapeutics laboratory. “This treatment stimulates immune cells to work against the tumour. Irradiation can make a tumour more immunogenic, thus increasing the body's immune response. Alongside this, however, we have also seen immunosuppressant effects. We are working to limit this in order to maximise the effectiveness of radiotherapy.”

Literature data show that ionising radiation, in addition to its direct cytotoxicity, causes anti-tumour immunity in the organism. Radiotherapy causes tumour-associated antigens to be salted out, produces pro-inflammatory cytokines, leads to immune-stimulating cell death, and restructures vessels to help T cells (essential killer cells in the immune response against cancers) infiltrate into the tumour.

Stimulating the immune system with radiotherapy

The LySAIRI project, the winner of the RHU Call for Proposals, aims to develop innovative radiotherapy that can stimulate the immune system without weakening it. This is being done by focusing on two areas of study: by reducing the harmful effects of treatment on immune cells and using medication to stimulate immunity.

After surgery, radiotherapy is the second most powerful treatment in curing patients. So, the stakes are high. “The objective is to now double the number of people cured without side-effects” clarifies Éric Deutsch.

The first part of the project is innovative and involves using artificial intelligence to better target tumours using radiotherapy. “We want to make treatments more precise,” continues Éric Deutsch. “To do this, we are using artificial intelligence to correlate what we have seen on a microscopic level with images from CT scans. We want to target areas that need to be treated using imaging data better.” Doctors will be able to determine which areas need to be treated in the patient, and with what dose of radiotherapy, based on the CT scan results. Éric Deutsch and his teammates would like to use algorithms to model virtual microscopic images of tumours and succeed in better identifying areas to be treated and in improving radiation doses to be used. “The more precise we are, the more accurately we can adjust the treatment to be given,” explains the researcher.

In order to reach this objective, the team is studying tumours taken from the breasts of a sample of patients. Microscopic observations are digitised, and data are correlated with previously generated CT scan images. With this, scientists have been able to derive an algorithm and evaluate with a high precision the regions of a tumour that had been seen via imaging using artificial intelligence. This process helps in accurately determining how large a radiation dose should be used.

The second part of the project is modelling blood flow in the necks of patients, in order to accurately quantify how much radiation is received by circulating immune cells. “We use algorithms that have been developed by cardiologists and radiologists to measure cardiac output,” continues Éric Deutsch. “This is the first time that we are looking to measure the impact of radiotherapy. This will allow us to calculate how large the dose that cells receive is.”

A ready-made solution for hospitals

The third part of the LySAIRI project aims to develop software that can carry out these operations automatically. “Our aim is that in just one click, the doctor can have a microscopic view of the tumour and therefore can optimise the dose of radiation to be used,” explains Éric Deutsch. In other words, a ready-to-use solution for hospitals.

The team is also interested in medication that can protect the immune system and how they are used. “We are going to use immunocytokines that foster the growth of T cells and natural killer cells (note: lymphocytes in the innate immune system that can kill tumour cells) involved in the anti-tumour response,” explains Éric Deutsch. “Although these treatments are well known and have been well identified, no one has previously thought to use them in the fight against cancer. We hypothesise that radiotherapy should also include immune system stimulation for it to be fully effective.”

“The innovative aspect of this project comes from the idea of breakthrough change; we have been using radiotherapy for 100 years but never before has such work been conducted. These methods can also be adapted to suit the different types of radiotherapy that are used to fight cancer. We can no longer ignore the harmful effects of radiation on the immune system,” says Éric Deutsch.

For this project, the team – which is made up of biologists, oncologists and therapeutic radiographers, imaging specialists, physicists and medical physicists, engineers and mathematicians – is working in partnership with the Centre Léon Bérard in Lyon, which is providing patient data. The TRIBVN start-up, which specialises in digital pathology, is contributing by working on artificial intelligence and seeing how it can be used to develop new tools for the medical field.

“We also want to quantify the usefulness of our project for society,” continues Éric Deutsch. ESSEC, a business school, will study the societal benefits of the LySAIRI project. It will assess the cost of treatments and the time saved thanks to operations being automated using artificial intelligence. They will also estimate the extent to which this saves money for hospitals and the social security system.

“Part of the LySAIRI project started before the RHU Call for Proposals because we already had the first set of data,” explains Éric Deutsch. “Without this funding, however, we wouldn’t have had this same collective dynamic or have been able to plan for certain aspects of the project. Funding will help us to carry out a full analysis and to set our sights higher. LySAIRI will receive more than nine million euros over five years. We are first going to focus on head and neck tumours. This is the first step, but we would like to extend the project to other cancers. This research is likely to evolve and other projects may arise from it,” concludes the researcher.