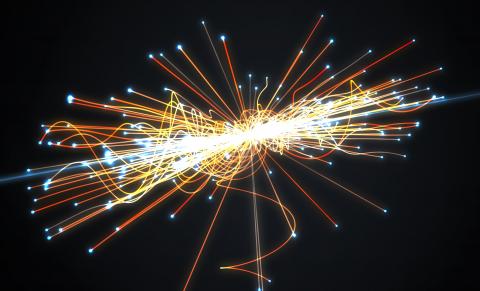 Sébastien Descotes-Genon: exceeding the limits of the standard model of particle physics

Sébastien Descotes-Genon is a researcher at the Physics of Two Infinities – Irène Joliot-Curie Laboratory (IJCLab – Univ. Paris-Saclay, CNRS and Univ. Paris Cité) and Deputy Research Director at the Physics Graduate School at Université Paris-Saclay. He is fascinated by the study of quarks and their interactions, and is aiming to go beyond the limits of the standard model.

Sébastien Descotes-Genon studied engineering at the École polytechnique. In 1996, he completed a DEA (Advanced Studies Diploma) in theoretical physics at the École nationale supérieure de Paris. In the year 2000, he defended his thesis on theoretical particle physics which he had carried out at the Orsay Institute of Nuclear Physics (IPNO). The subject matter focused on the properties of hadrons containing the light quarks up (u), down (d) and strange (s), and concentrated on the role played by the mass of the s-quark. Other types of quarks (of which the s-quark is one) exist in the natural world, but they are heavier, decay very quickly and are not observed in the everyday environment. They are all sensitive to the three fundamental interactions (weak, strong and electromagnetic), and the strong interaction forces them to stay together as hadrons. “I’ve shown that, due to its light but yet still significant mass, the s-quark can alter the generally accepted links between the properties of strange hadrons and their constituent quarks, for example their mass or lifetime. Currently, the question remains unresolved and continues to be studied by theorists who are conducting intensive digital simulations of the strong interaction.” After his PhD, the researcher completed a post doctorate at Southampton University in the United Kingdom and then joined CNRS and the Laboratory of Theoretical Physics (LPT) in 2002.

Sébastien Descotes-Genon’s area of research focuses on particle and high energy physics, i.e. the structure of matter at the smallest known scales. He is aiming to understand what it is made of and how its elementary components, in a very wide range of energies, interact with each other to form matter in the surrounding environment. He uses the standard model to achieve this. The standard model is a theoretical framework developed over the past fifty years which combines quantum mechanics and the theory of relativity, and is based on the mathematical principles of symmetry. He then links this theoretical understanding with the results obtained from experiments – in particular those carried out at CERN in Geneva (Switzerland) which is home to the LHC (Large Hadron Collider), the largest particle accelerator in the world. By solving the equations which describe the behaviour of the particles and their interactions, he can check if the predictions made by the standard model correspond with the results from the experiments, or whether there are any deviations.

The decay of b-quarks: understanding the difference between matter and antimatter...

Sébastien Descotes-Genon states that “when two beams of protons collide at very high energies, new particles can be created, illustrating that matter is not limited to up and down quarks.” Bottom quarks (b) can be found amongst these new quarks and are particularly heavy. The researcher decided to focus his research on these from the year 2000 onwards. “I’m involved in a type of physics called ‘flavour physics’ because it studies the different types of quarks, which rather poetically are known as ‘flavours’. It straddles the line between the study of the standard model, which I’m seeking to verify, and physics beyond this model or 'new physics', as I’m interested in the unexpected behaviour which goes beyond its theoretical framework.” The data collected on the b-quark has led him on to study the differences in probability between the decay of the b-quark and that of the associated antiquark. Sébastien Descotes-Genon can show that the differences observed between particles and antiparticles are in line with the expectations of the standard model, but this is no longer the case when you try to relate these differences to large-scale physics. “When looking at the history of the universe, it’s difficult to explain the imbalance observed between matter and antimatter by relying just on the standard model.”

...and perhaps reaching the limits of the standard model?

Since 2010, the researcher has been focusing on rare decays (i.e. unexpected) of the b-quark, which are potentially more sensitive to the impact of new physics. This is what the LHCb experiment at the LHC has shown. It has measured several deviations from the standard model. Together with his colleagues, the researcher has shown that these deviations are consistent with each other. As a result, scientists can then contemplate the different physical phenomena at their origin, such as the existence of a new interaction linked to a Z boson (a subatomic particle) or leptoquarks – a new type of particle.

From 2014 to 2018, Sébastien Descotes-Genon added another string to his bow and became involved in teaching. He taught on the Astroparticle Nuclei and Cosmology Master course (NPAC) at Université Paris-Saclay which is aimed at future theorists and experimental scientists in high-energy physics. “This experience was very enriching as I reviewed and deepened fundamental aspects of my discipline which I’d taken for granted. And interacting with the students gave me the challenge of trying to find pertinent responses to their questions. This was very stimulating.”

Converging interests lead to the creation of the IJCLab

In 2014, the researcher took on the management of the LPT and from 2017 onwards, he initiated discussions with four other laboratories in the Vallée campus at Université Paris-Sud (which is Université Paris-Saclay today) with a view to a merger. These were the Linear Accelerator Laboratory (LAL), the Orsay Institute of Nuclear Physics (IPNO), the Centre for Nuclear and Material Sciences (CSNSM) and the Laboratory of Medical Imaging for Neurobiology and Cancer (IMNC). This collective approach was encouraged in particular by the joint projects funded by LabEx P2IO (Physics of the Two Infinities and of Origins), one of the vehicles for future investment programmes designed to support collaborative research. This gave him the opportunity to interact with many researchers with whom he had previously had little contact. “It opened my eyes up to the different jobs available in physics research, some of which I knew little or nothing about.” The merger took place in 2020 and resulted in the creation of the Physics of Two Infinities  – Irène Joliot-Curie Laboratory of which Sébastien Descotes-Genon is one of the two Deputy Directors. This laboratory has an ambitious research programme focusing on the physics of the infinitely small and the infinitely large.

Deputy Director of the Physics Graduate School at Université Paris-Saclay

This same year, Sébastien Descotes-Genon became Deputy Research Director at the Physics Graduate School at Université Paris-Saclay. The new organisation has a track of master’s degree in Physics, a new generalist 1st year and twenty-one 2nd year of master’s degree. The Graduate School comprises more than forty laboratories, about 4,000 researchers, academic staff, engineers, technicians and PhD students. It is structured around three main areas of focus: the physics of the two infinities, the physics of waves and matter, and astrophysics. “It’s a new venture of joint development, with, once again, great opportunities for collaborating with physicists from very different backgrounds.”