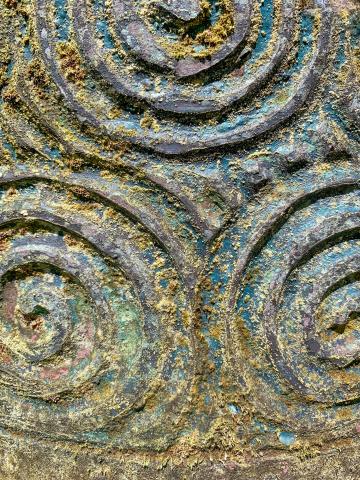 What is the future for research on ancient materials?

How can ancient and heritage materials be studied most effectively? According to Loïc Bertrand, a researcher at the Supramolecular and Macromolecular Photophysics and Photochemistry Laboratory (PPSM - Univ. Paris-Saclay, ENS Paris-Saclay, CNRS) and Serge Cohen, a researcher at the European Photonic Institute for Non-destructive Analysis of Ancient Materials (IPANEMA – Univ. Paris-Saclay, CNRS, UVSQ, Ministère de Culture et de la Communication) this can be achieved by taking into account their unique characteristics and embracing other disciplines.

A fossilised crab which is about a hundred million years old, a painting by Piet Mondrian, a Neolithic amulet, fabric samples from collections held at the Louvre Museum. This selection is a good illustration of the wide range of objects studied by Loïc Bertrand, a researcher at the Supramolecular and Macromolecular Photophysics and Photochemistry Laboratory (PPSM - Univ Paris-Saclay, ENS Paris-Saclay, CNRS); Serge Cohen, a researcher at the European Photonic Institute for Non-destructive Analysis of Ancient Materials (IPANEMA – Univ. Paris-Saclay, CNRS, UVSQ, Ministère de Culture et de la Communication) and their colleagues. Materials which make up heritage objects share unique common characteristics, unlike modern synthetic materials whose composition is often very tightly controlled. As Loïc Bertrand explains, “We see two distinct ways of approaching materials. You can either start from relatively simple systems which can be simplified for experimentation so that they can be understood with a high degree of precision, or you can explore real systems to try to identify the key parameters which govern their evolution.”

It is impossible to ignore the unique characteristics of these rare objects, which have been altered over often extremely long periods of time, and whose mixed composition often combines organic and mineral elements. This is especially true since the historical and physico-chemical trajectory of each of these objects is unique. To recreate this trajectory during an experiment is almost impossible. As a result, each experiment itself has to have an aspect which can not be replicated.

Analysing in all its complexity

Serge Cohen sums it up as follows. “It would be easier not to have to manage these different variables and to use samples which would make it possible to move forward more quickly. We’re working in a field where this type of shortcut can’t be made.”

One example of this is the difficulties encountered when analysing the pigment Prussian Blue. The manner in which the pigment discolours depends greatly on the medium on which it is found. Not taking into account the interaction of the pigment with its support would completely distort any results obtained. Serge Cohen points out that this does not mean that a lot of preparation work is not necessary. “Our samples are prepared using standard techniques and optimised parameters, precisely so as not to risk erasing their complexity.”

The unique nature of their work involves considering these constraints as something which require some creativity and finding new ways to access the information contained in these materials. One of the keys to this approach is observation at different spatial and temporal scales. Understanding the effects of degradation involves studying them at the centimetre level down to that of the atom. Even this involves eight orders of magnitude! To achieve this, they have used instruments from the IPANEMA laboratory and the SOLEIL synchrotron - a ring with a circumference of 354m, which accelerates particles and emits beams of light. The power of these devices makes it possible to capture the composition of the materials studied (including their structure and morphology) by collecting digital data which is then analysed using mathematical methods - in particular statistical methods - which are adapted to each challenge encountered.

This method has already borne fruit in the study of fossils, for example. Multiscale and long time scales reveal minute details in biological samples of organisms which lived millions of years ago. Taking these 'trace' elements into account provides valuable information on the pH and temperature conditions at the time of the organism's death and during the changes it underwent during fossilisation.

Learning from other fields of science

Their work draws on insights from other disciplines. Loïc Bertrand attaches great importance to this. “Our colleague, Étienne Anheim for example, who is a historian specialising in the Medieval period, has given us a lot of tips on how to approach these systems. They can be approached both in terms of their physical reality and through the questions posed in art history or archaeology which draw on all the possibilities created by concepts such as historicity, evidence or case-based reasoning.” Concepts developed by human and social sciences are very rarely used in material sciences. Their current work involves connecting concepts from very different disciplines for each research object, with the advantage of creating mutual enrichment. An example of this is when photoluminescence imaging analysis revealed a key step in the manufacture of a metal amulet at a point when this early lost-wax casting technique was considered to have been forgotten forever.

Another important aspect of this approach concerns how the data collected is processed. While the recent increase in detection capabilities now allows for the detailed study of hybrid systems, it leads to an increase in the volume and complexity of the data to be handled. In order not to overload the computers needed to process this data, it is essential to optimise the latter by combining the theoretical and applied aspects of the methodology. This concern about limiting data volume affects many other areas in addition to that of ancient materials. For example, environmental science has to deal with models incorporating a very large number of parameters, a huge amount of data and limited computing resources.

The training provided could in turn be inspired by such approaches. “Complex materials have hardly been looked at due to discipline compartmentalisation. Organic chemistry, inorganic chemistry and biochemistry are taught in separate curricula, with differing analytical approaches. Since our systems involve all three disciplines, this distinction is of no use and we believe that bringing this knowledge together is a challenge for future graduates. The necessary subject-based learning should be combined with the study of complex systems by developing interdisciplinary skills based on observation.”

Objects from the past and materials for the future

These possibilities for cross-over between disciplines open up particularly promising avenues for innovation. Since the ancient materials we study are by definition the ones which have been passed down to us, why not use their unique characteristics to create modern and sustainable paleo-inspired materials? This is something the two researchers are proposing. “We’ve seen organic compounds (DNA, proteins, dyes) preserved for thousands or even millions of years in systems where this wouldn’t normally be considered possible in theory. Our basic assumption is that the heterogeneous nature of these systems is one of the keys to their durability.” This is the starting point of a new way of moving from ancient materials to those of the future.